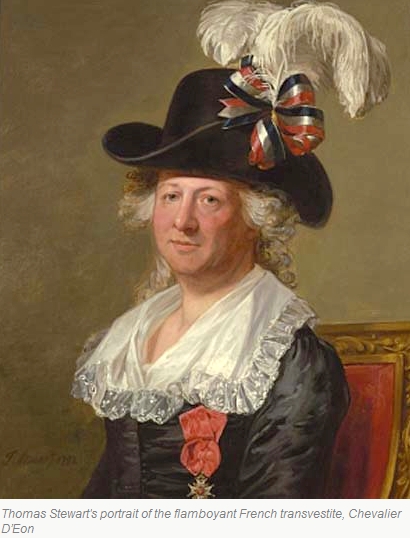 
London art sleuth and specialist art dealer Philip Mould dropped across a portrait of the legendary spy, diplomat and transvestite, Chevalier D’Eon, in a New York auction house. He is now displaying it in his gallery in London’s Dover Street.

Mould, who is also an art expert on the BBC’s Antiques Raodshow, believes the painting of a “rather masculine looking woman” to be the earliest surviving formal portrait of a male transvestite.
“The 18th century portrait appeared to be of a somewhat manly middle-aged lady,” he says. “Research before the sale suggested otherwise, and upon cleaning, the face revealed a distinctive 5: 0’clock shadow.”

Further investigation resulted in the identification of the sitter as Chevalier D’Eon, popularly known as “the Patron Saint of Transvestites".

“The painting is now under serious consideration by the National Portrait Gallery,” adds Mould, whose company financially supports the venue. “Should it be purchased it will represent the gallery’s first oil painting of a cross-dresser in guise.”

Eon’s life represents one of the more colourful 18th century picaresques and takes in everything from a French aristocratic background and service in the Dragoons to a career as a spy and a spell on the London stage as a cross dressing fencing master.

He is thought to have spied for Louis XV, undertaking espionage missions to Russia beneath the nose of the Tsar dressed as a maid, before becoming French Ambassador to England.

A falling out with the French King led to him scandalously publishing some of his covert diplomatic escapades and a period openly dressing as a woman on the streets of London.

His fame and notoriety in the capital was such that the gentlemen of the London Stock Exchange opened a betting pool about his true sex.

The portrait, which was discovered in a collection formerly owned by Ruth Stone - daughter of Samuel Klein of Klein’s Department Stores in the US - is now thought to have been painted by Thomas Stewart, who painted actors and theatrical scenes in London during the 1790s.

A fencing accident on the stage lead to Eon’s slow decline. Seriously wounded during a performance, he eventually ended up in a debtor's prison. 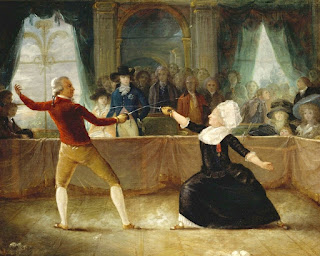 One cannot wonder:
Why has there not been a movie made on this character from history?
Many times fact is better than fiction.