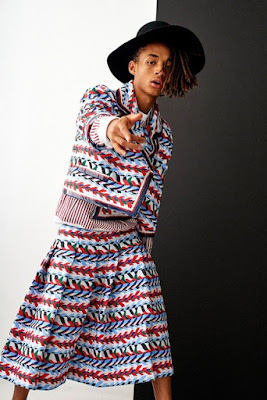 Jaden Smith’s Adventures in Gender Fluidity: What It Means, Who Profits

Jaden Smith is having a moment of transition — from precocious Hollywood son to high-earning spokesperson for a new frontier in gender identity.

Jaden, the 17-year-old star of Baz Luhrmann‘s upcoming Netflix series “The Get Down,” has generated considerable heat in 2016 for the way he’s expressed his gender both on social platforms like Instagram and by modeling womenswear in a national campaign for Louis Vuitton.

“What he’s reflecting in these bold choices is a refusal to be labelled or combined in one stereotype or another, in terms of who you are and how you dress,” Eliza Byard, executive director of the Gay, Lesbian and Straight Education Network, told TheWrap.

“Whether its a skirt or a flower behind his ear, he’s making very public a whole strand of enjoyment that we see from youth all across the country.”

What is gender fluidity anyway? It’s a movement that regards gender as “a spectrum rather than a set identity — and there are number of positions on that spectrum available to people to express who they are,” according to Jack Halberstam, gender studies professor at the University of Southern California.

Jaden, the son of Will Smith and Jada Pinkett Smith, is proof that “masculinity is a much more flexible commodity than it was 10 years,” Halberstam said. “As is true for a lot of young people, gender and sexuality aren’t the categories they were in previous generations. It has more an experimental vibe and Jaden could be at the cutting edge of that adventure.”

In images for Louis Vuitton’s spring-summer women’s line released last month, Smith unapologetically rocked a pleated skirt-suit, a mesh fringed tank and posed with a series of handbags from the Nicolas Ghesquière-designed campaign, titled “The Heroine.“

“This is what fashion is doing now — androgynous models, men in womenswear,” said Halberstam, who believes that increasing acceptance has allowed for the capitalization of these identities. “Gender fluidity has become a tool for marketing.”

The pairing of Jaden Smith and Louis Vuitton is a natural fit. “[Vuitton] is marketing a flexible masculinity that doesn’t have to obey a culture of suit-and-tie, but expresses more softness,” Halberstam said. “He’s a good-looking slender black man, and a clotheshorse.”
Byard added, “How wonderful that we’ve come to a point on our culture that this is seen as potential asset and not a liability.”

Halberstam is quick to distinguish Jaden’s fashion choices from any more political statements about gender, culture or social justice. “Jaden is the lucky beneficiary of a new fluidity — he is not a new pioneer of any kind, any more than Caitlyn Jenner is,” Halberstam said, referring to the former Olympian who brought transgender issues to the forefront in 2015.

Jaden also appears to be the beneficiary of some exceptional parental support. Dad Will recently discussed his son’s progressive nature in an interview with the BBC, calling his son “100 percent fearless.”

“He will do anything, you know?” the older actor said. “So as a parent it’s scary, it’s really terrifying, but he is completely willing to live and die by his own artistic decisions and he just doesn’t concern himself with what people think.”

Byard applauded both Will and Jada for “standing by their courageous, curious and expressive child — and for calling out how much our society is still wedded to very traditional normative ideas about how you’re suppose to be. How wonderful that we’ve come to a point on our culture that this is seen as potential asset and not a liability.”

That’s not always the case for other teenagers who want to explore gender fluidity — regardless of the family’s wealth or fame. “There’s always a balance for that person in Arkanas,” she said. “It’s very important young people get the message that who they are is fine.” 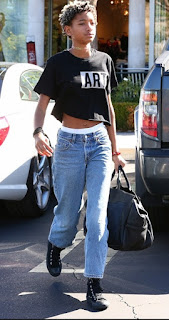 Jaden Smith
Posted by rhonda's escape at 7:00 AM