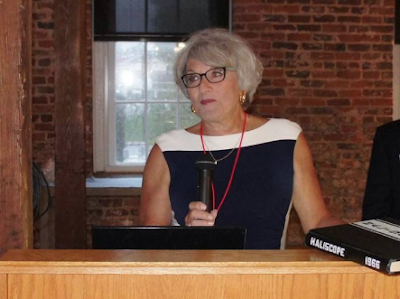 Speaking before my class at the reunion

Going to my high school reunion require more courage than I initially anticipated.  Yes, more nerve than I had to muster up for any recent Rhonda outing.  My biggest fear was that I was stealing the limelight and making it about me; my changes; my “In your face” transgender state. I honestly consider not going and once there I considered being a wallflower.  Here is my logic on the “why” I went and why I spoke.  I will begin with a story.

On one of my jobs about 30 years ago, we had a very interesting roundtable of investors and consultants.  I hit it off with one of the investors/company spokespersons and we became friends.  Plus we had children about the same age. I liked his sense of adventure and I believe he liked my professionalism.  It was at a dinner one evening and he asked if we would like to see his trip slides. This was at a time that involved setting up a projector, screen and everyone gathering in a darkened room.  We have all been there.  The click/swish of slides moving in and out can seem endless.

I will get back to the slide show in second but first, know there is a difference between being aware of a concept and putting a face to it. Many are aware of the term transgender and have a vague understanding - Oh, that Caitlyn Jenner thing.  Just as what happen with gays - once you know someone, have a neighbor, workmate or family member it is no longer a concept.  It is now a person; a friend; or classmate.  I wanted my class to know someone transgender. Put a face and outgoing personality to the concept.  Attitudes change one person at a time.

So, back to the slide show. The home I was in and slide show presenter was Dr. Edgar Mitchell. His trip was to the moon aboard Apollo 14.  He spent nine hours working on the lunar surface and had the photos/slides to prove it.  We all sat in complete silence, as photo after photo of the lunar surface and earth in the distance, came up. The space program and the moon landing was no longer a concept. I was having an evening with someone that had been there, lived it. It was real!

You making yourself available as a representative of the transgender community can change attitudes. You can make it real. Hiding who/what I am, was not an option. That was the source of my courage to be at the reunion.