During my travels back to Virginia I stayed at a very unique resort.  Not exactly a hotel or anything resembling that, but a true Southern Plantation; Berry Hill Resort. This former antebellum plantation estate and National Historic Landmark welcomed its first guests to the beautiful Virginia countryside in 1728.  The main house built in 1839, shown above, is one of Virginia's finest examples of Greek Revival architecture.  It's eight massive columns that make up the main facade are in emulation of the ancient Greek Parthenon.

There are rooms available in the main house and just to the side of the main plantation house are over 92 all new luxurious guest rooms. The new rooms are adorned with antiques, sleigh beds, four posted beds, towel warmers, in-room coffee and wireless internet. That is where I stayed.  Even the modern rooms have the charm of stepping back in time. While there, I enjoyed the café, toured the main house/grounds and had lunch in the main house.

In 1968, then governor Mills Godwin commissioned the book Architecture in Virginia that described Berry Hill this way:

"Berry Hill was almost the last of the great houses to be built in Virginia...Its isolated site lends an almost overpoweringly romantic aura to the distinction of its carefully executed portico flanked by two small Doric pavilions. The entire composition is on as grand a scale as any of Virginia's domestic architecture, with the possible exception of the Governor's Palace in Williamsburg. It is a notable achievement, particularly when one realizes that it was carried to completion in a remote area of the Commonwealth. This isolation gives the entire composition as almost theatrical air of romanticism, in spite of the classic forms of the three buildings that frame the forecourt."

In 1971 it was desiganted a " National Historic Landmark" by the National Park Service.  There is much history associated with the wonderful place.  If interested read this account of the family, plantation and home. 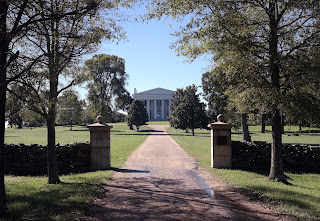 Growing up in the area there were many stories associated with the entire location - Fact, fantasy, and fiction.  However, either way, very interesting and shall we say, hauntingly fascinating.

This was my third stay at Berry Hill and its meticulous restoration is beauty to behold.  It has become an out-of-the way wedding destination and retreat for the well-traveled seeking a quiet weekend get-a-way spot. It was a walk back in time for this southern country girl and a rare glimpse into the long lost antebellum life style.  I wanted to put on a lace up corset, hoop skirt and relive a time gone by.

“I'll think of it tomorrow, at Tara. I can stand it then. Tomorrow, I'll think of some way to get him back. After all, tomorrow is another day.”

― Margaret Mitchell, Gone with the Wind 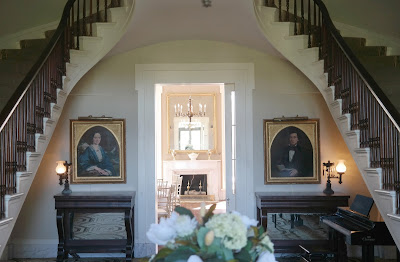 Stay Tuned - Tomorrow I will put more photos of this worth seeing incredible show place.
Posted by rhonda's escape at 5:00 AM