With strong stage presence and striking features, 32-year-old Anjali Lama looks at home among the sea of models at Lakmé Fashion Week in Mumbai. But with every step on the runway, she is making history.

Born Nabin Waiba, as a boy growing up in the rural district of Nuwakot in Nepal, Lama was often severely bullied for having feminine tendencies. This week -- as Anjali Lama -- she became the first transgender model to grace the catwalk at India's premiere fashion event.


Lama has spent the majority of her life tackling discrimination and prejudice. As a child she was bullied at school, while at home she was pressured to conform to gender stereotypes by her father and brothers.

I enjoyed wearing women's clothing, and at school I mostly had female friends. The kids at school used to mock me and say 'he's a girl.' Then at home, my father would scold me, asking 'what will you do with your life?' At the age of 18, Lama moved to Nepal's capital city, Kathmandu, where her struggle with gender identity continued. She describes this period now as "mental torture.
I was there for college but worked at a hotel and was fired because of my feminine behavior. They said I made the customers uncomfortable.

A chance encounter, however, changed everything.

"While I was living in Kathmandu, I was watching television and stumbled upon a show about transgender people. I thought to myself, 'I'm like this too.'" Inspired by her discovery, Lama reached out to a group of transgender people, eventually stumbling upon Blue Diamond Society -- a group in Nepal which advocates for sexual minorities. "I realized I'm not the only one, this is my society," she says. 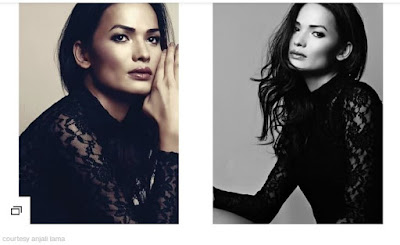