The United Methodist Church has appointed a transgender deacon. 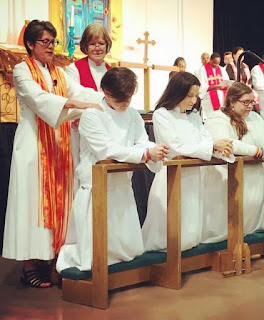 The bishop spoke the traditional words as she placed her hands on the new deacon named M with just a slight difference from the way those words have always been spoken before.

“Pour out your Holy Spirit upon M,” the bishop said. “Send them now to proclaim the good news of Jesus Christ, to announce the reign of God and to equip the church for ministry.”

That’s what M Barclay has been working for 12 years to finally hear.

Barclay, a transgender person who identifies as neither male nor female and thus uses the pronoun “they,” was commissioned on Sunday as the first non-binary member of the clergy in the United Methodist Church.

The United Methodist Church is one of the largest denominations in America, falling behind only the Catholic Church and the Southern Baptist Convention. The mainline Protestant denomination has been bitterly divided over sexuality and gender identity: Its official rules say clergy must either be celibate or in heterosexual marriages, and can perform only such marriages, but American bishops have ordained gay and transgender clergy before, and clergy have conducted same-sex marriages.

In the Northern Illinois Conference, where Barclay was commissioned Sunday, Bishop Sally Dyck said in a statement:


While M’s journey over the last few years has included gender identity, all of those who were commissioned or ordained on Sunday have been on some kind of journey that has brought them to new places of faith, life and relationships. Likewise, I hope the church will find itself at a new place in the near future when it comes to full inclusion.


Read the whole article here in the Washington Post

Note: This was my family and childhood church in rural Virginia. Makes me proud.