I have written a post for Transgender Day of Remembrance for the entire five years this blog has been in existence. This day, November 20th, is the annual observance that honors the memory of the transgender people whose lives were lost in acts of anti-transgender violence.

I wish that I could report that this year no deaths occurred or the numbers had gone down.  According to Forbes Magazine, that is not the case:

350 transgender people were killed this year (2020), in a figure that has risen since last year’s total of 331. The violence and horror of the murders, where transgender people were burned alive, suffocated and murdered, are cataloged by the Transrespect versus Transphobia Worldwide (TvT) which also has the full list of all those killed this year.

But because many hate crimes and murders go unreported or, crucially, misreported in the media – the true number of deaths could be far higher.

According to The Human Rights Campaign (HRC),  Transgender Day of Remembrance is an opportunity for communities to come together and remember transgender people, gender-variant individuals, and those perceived to be transgender who have been murdered because of hate.

Please take a moment to reflect on ours sisters and brother that were murdered this year;  for no other reason other being transgender.  Here is the complete list. 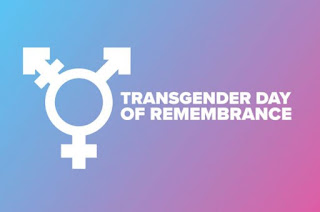