Harry Styles: The Face of the Modern Gender Debate 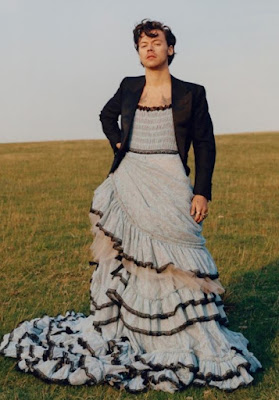 Harry Styles, former member of the boy band One Direction and accomplished singer and songwriter, made history this year as the first male to appear on the cover of US Vogue magazine. This by itself would be a significant step for gender equality in fashion. His outfit, however, is what has drawn the most attention to the shoot. The cover of their December edition features Styles wearing a flowy, periwinkle blue Gucci dress with an accompanying black jacket. According to The Guardian’s André Wheeler, “The image felt representative of a growing exploration of gender-fluidity and non-binary dressing taking place,” adding that this idea of gender fluidity is growing more popular among the younger generations, which is who Vogue caters to.

In this way, Styles has become a catalyst for the modern gender debate, fueling the anger of the conservative right over traditional gender roles being muddied and the liberal left stepping in to defend these new modern ideas of gender fluidity.

Styles has been known for wearing less than traditional clothing in the past as well. At the 2019 Met Gala he wore what his stylist described as “taking traditionally feminine elements [..] but then rephrasing them as masculine pieces.” He is in many ways representative of the new wave of gender-neutral clothing and fashion developing today, fueled by the more liberal ideas shared by a large portion of the younger generations.

Critics argue that while this was a good step for gender-fluidity in both fashion and everyday life, it was not the huge progressive leap forward that some may think. At the end of the day, Harry Styles is still a rich, famous celebrity, and this gives him the ability to press gender norms in a way that the average person might not be able to.

Whichever way you stand on the debate, there is no doubt that this conversation needs to be had, both in the United States and the rest of the world. As our society progresses, how do we discuss the way that gender plays into fashion? How can we balance progress and tradition within gender roles without angering differing groups of people? Harry Styles and his periwinkle gown have become the face of this debate, and it is one that is going to become more important as time advances on.

*Wow:  What a well written article - Evelyn is a Sophomore at West Morris Central and a Journalism I student.