People Who Mistake Our Boy For a Girl

Why We Don't Correct 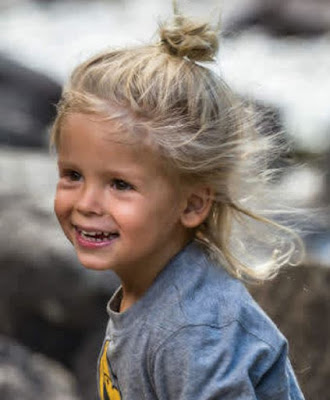 Mom.com
My 2-year-old son has long eyelashes, delicate features and long, flowing golden locks that we sometimes put in a ponytail or in a bun above his head. Consequently, it's not unusual for other adults at the playground to look at Declan and exclaim, “What a pretty little girl! You have such a lovely daughter.”

When that happens, we thank the complimenter but we rarely correct them. I suspect that’s because, especially at my son's age, gender doesn’t really matter. I don’t want Declan to grow up drawing lines between boys and girls, and masculine and feminine. I don’t want him to grow up associating long hair with girls and short hair with boys. I also don’t want him to think that being mistaken for a girl is, on any level, insulting.

I don’t want him to see gender from the perspective of stereotypes and preconceptions, if he sees it at all.

Now I’m not proposing that I'll raise my son in some sort of progressive post-gender utopia. That would be impossible in a country and a culture that, for all its social advances, still tends to see things in starkly blue and pink terms. But I do love that he lives in a world where he can wear his tutu for hours at school and no one thinks anything of it.

Thankfully, the world has changed an awful lot in the past 30 years, so hopefully it'll be easier for him than it was for me.

I was nowhere near as pretty as my son when I was a boy, but I had a high-pitched voice and some feminine mannerisms. I consequently grew up super self-conscious about whether I was masculine enough. It played havoc with my fragile self-esteem, and the pressure to conform to our society’s idea of masculinity grew throughout elementary and high school and only really lessened during college, when conforming to rigid gender stereotypes stops being considered a universally positive quality.

There's a good chance that my wife and I will have tough conversations about gender with our son as he grows up, and that the same pressures I faced will also affect him. Thankfully, the world has changed an awful lot in the past 30 years, so hopefully it'll be easier for him than it was for me.

But at this point, we’re loving living in a world where he doesn't seem to know or care about gender differences, and we’d like to sustain this period of dewy innocence as long as possible.