Appearing In Public Dressed Outside Your Birth Gender, Outlawed.

What are you going to do if cross-dressing is outlawed?

Laws criminalizing cross-dressing spread like wildfire around the United States in the mid-19th century. New York’s, dating back to 1845, was one of the oldest. It declared it a crime to have your “face painted, discolored, covered, or concealed, or [be] otherwise disguised… [while] in a road or public highway.”
The state originally intended the law to punish rural farmers, who had taken to dressing like Native Americans to fight off tax collectors. But as scholar William N. Eskridge, Jr. recounts in his encyclopedic book Gaylaw, “by the beginning of the 20 century, gender inappropriateness… was increasingly considered a sickness and public offense.”
Existing laws against costumed dress, even if they didn’t specifically mention cross dressing—collectively referred to as “masquerade laws”—were increasingly pressed into service around the country to punish gender variance.
When he was found guilty and sentenced to three years in a reformatory, the judge made it clear that despite the new charge, he was being punished for his dress. “No girl would dress in men’s clothing unless she is twisted in her moral viewpoint,” the magistrate proclaimed from the bench, according to a September 3, 1913 article in the Brooklyn Daily Eagle.

Think it can not happen?  THINK AGAIN!

According to CNN: 150+ anti-LGBT proposals:

A separate CNN analysis by Giselle Rhoden includes a map of more than 150 anti-LGBT bills introduced at the state level so far this legislative session. They range from restricting access to gender-affirming health care for minors to excluding transgender children from athletics. Some examples:

All these proposals make it harder for certain Americans to be who they are, which is counter to the idea of parental rights or individual freedoms. 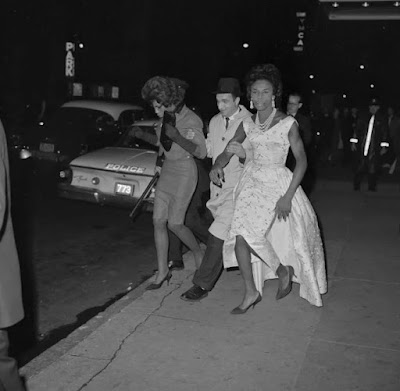 Many men dressed as women were locked up on charges of masquerading and indecent exposure at the National Variety Artists' Exotic Carnival and Ball held at the Manhattan Center in 1962. Police and detectives herded the costumed guests into police wagons in front of the ball.
Posted by rhonda's escape at 5:00 AM