I wore men's pants for a day and, frankly, women get a raw deal

Every so often, I like to conduct a fashion experiment. Like the time I thought I could be a "mum" jeans convert but ended up giving them to charity after two very unsatisfying wears.

More recently, I interviewed the designer of a popular menswear brand about women shopping across the aisle, and decided to do a little gonzo journalism by picking up a pair of tailored suit pants.

First, there was the store visit. The staff were expecting me, so that eliminated the, "Are you shopping for your boyfriend?" question. Then there was finding the right style to suit my petite-with-hips-and-a-bum size 8 frame. 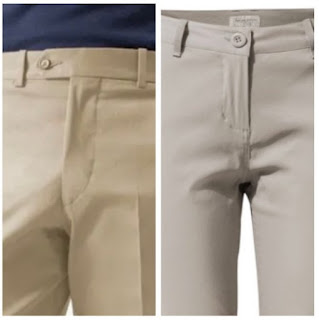 The smallest size was a 28, a few inches larger than I wear in jeans, but to my surprise, the alterations person only needed to cinch them in about 1.5 centimetres. Of course, she needed to shorten them by about six inches so I could wear them with sneakers or a modest heel.

It was the first time I wore them to work that I had a revelation. I seemingly glided from house to tram to office, feeling like I wasn't wearing pants at all. There was no "swoosh swoosh" of the fabric and the pockets – the pockets! – they were roomy enough for my Myki and my phone. And then it hit me: I realised why men appear to move through the world with more ease, and it has nothing to do with the patriarchy (OK, maybe just a little). It's because their pants are more comfortable.

I had to learn more, so I contacted tailor Julie Goodwin to ask why, when it comes to pants, are women getting such a raw deal?

"Mainstream fashion has short-changed women when it comes to all forms of tailoring … even the quality of the materials are not as good," Goodwin tells me.

There are several key areas where men's and women's pants differ and, most often, women are the losers.

Sizing:
One of the most obvious points of difference is in the crotch area, to allow for men's extra ... parts. "The tendency is to make the leg look longer in a ladies’ pant by making the crotch shorter but that sacrifices a little comfort," Goodwin says. "Women can be obsessed with wearing the smallest size possible but the secret to a really comfortable pant is to size up."

Fit:
Women can wear their pants anywhere from the "natural waist" (think your I'm a Little Teapot tilt point) to the hip, whereas men's pants tend to fall on the "trouser waist", which is lower. Goodwin's advice to women experimenting with men's pants is to buy for your hip size and have them altered. "Women’s pants off the rack are not made to be altered," she says. "It’s a tradition that menswear is made with alterations in mind – the seam at back is easily opened and accessible. We don't do that for ladies, we make them suffer. That’s ridiculous because as women, our body shapes are more varied."

Pockets:
A 2018 article in The Guardian by Chelsea Summers called out clothing manufacturers for sexism when it comes to pockets. She quoted research that found the average men's jean pocket was 23 centimetres deep, versus 14 centimetres for women. "Functioning pockets make women very excited," Summers wrote. "This is a sentence that shouldn’t need to be written in 2018. Women are busy, and we need to carry our stuff with the same ease as men do."

Goodwin says that because historically women have carried handbags, men's pants have been made with far more generous pockets, and they are often of higher quality in terms of fabric and finish. "When you're talking about the high street it’s just stinginess, it’s extra effort," Goodwin says.

So there you have it. Men's pants don't just seem better than women's pants, they very often are. And with all that extra depth in the pockets, I might even soon lose the handbag, too.