"I may have been suspended, but I will not be silenced. I am proud of who I am," said junior Jack Petocz after a protest against the [Florida] "Don't Say Gay" bill.

A Florida high school student has been suspended indefinitely after handing out pride flags during a walkout to protest the state’s so-called “Don’t Say Gay” bill.
Flagler Palm Coast High School junior Jack Petocz helped organize a statewide walkout on Thursday to protest House Bill 1557, a hugely controversial measure that would prohibit school instruction on sexual orientation and gender identity in kindergarten through third grade.
About 500 students at his Palm Coast school participated in Thursday’s walkout, chanting, “Say gay!” Petocz handed out 200 pride flags he said he purchased with his own money. Students had been given just 15 minutes to protest.
Petocz told the Daytona Beach News-Journal he was called into the principal’s office after the protest, “told I was disrespectful and openly advocating against staff.”
“They suspended me from campus until further notice. I informed the principal I wasn’t going to speak with him and was going to talk to a lawyer,” Petocz added.
He said an hour before the protest, the principal pulled him aside and specifically complained about the flags. “He told me I wouldn’t be allowed to [distribute the flags]. He went further to question the intentions of our protest, asking if pride flags were relevant to opposition to the bill.” 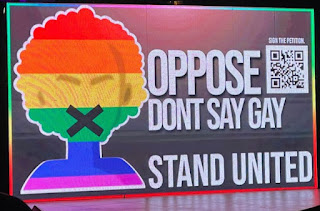 A spokesperson for the Flagler school district insisted in a statement to the Daytona newspaper that Petocz had not been suspended but had been “placed on excused administrative leave” while school officials investigate.
Petocz said he would do it again. “I may have been suspended, but I will not be silenced. I am proud of who I am, and I am #notafraidtosaygay,” he said in a Twitter statement.
One of the people responding to Petocz’s statement was Florida anti-gun activist David Hogg, who survived the 2018 mass shooting at Parkland’s Marjory Stoneman Douglas High School that killed 17 people and injured 17.
He reminded everyone that students in Florida are “not putting up with [Gov. Ron] DeSantis’s homophobic bull shit.”
__________
See also this CNN piece from Monday March 7th: Florida students participate in massive walkout to protest the 'Don't Say Gay' bill.