Timothée Chalamet bolstered his reputation as one of Hollywood's boldest dressers by showing up to the Oscars in Louis Vuitton womenswear. 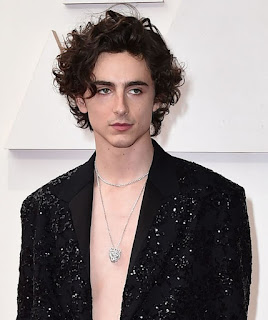 The star wowed onlookers at Hollywood's Dolby Theatre on Sunday evening in an embroidered lace jacket and high-waisted pants from the label's Spring-Summer 2022 collection. He then put his own spin on the gender-fluid outfit with a sparkling necklace and a pair of black boots.But it wasn't just what Chalamet wore that set social media alight, it was what he didn't: a shirt.
Bare-chested beneath his black blazer, the actor had fans swooning online. "Timothée Chalamet is basically a rockstar right?" wrote one Twitter user, with another joking: "I'd like to thank whoever made this outfit, Timothée Chalamet's parents, and God."
Standout looks from the Oscars 2022 red carpet
The 26-year-old star -- who featured in two movies nominated in this year's Best Picture category, "Dune" and "Don't Look Up" -- is known for his daring red carpet fashion. Recent award ceremonies have seen him named on "best dressed" lists thanks to his use of bright colors, sharp tailoring and elevated streetwear.
He also regularly looks to Louis Vuitton for the biggest occasions, not least the 2019 Golden Globes, where he wore a sparkling harness that went viral and sparked a menswear trend in the process.
Though the Academy Awards are known for comparatively restrained fashion, Chalamet has previously used Hollywood's biggest night to make statements -- like the all-white Berluti suit he wore to 2018's ceremony. Two years later, his hybrid blue Prada tracksuit-suit became one of the night's most talked about menswear looks after it drew online comparisons to various uniformed workers, from a paramedic to a parking valet.
Timothée Chalamet's daring red carpet evolution
The actor was one of several male stars to take an adventurous approach on this year's red carpet. Daniel Kaluuya and "The Power of the Dog" star Kodi Smit-McPhee were among those to eschew conventional black-tie with brightly colored suits.