From walking the Lakme Fashion Week for designer Wendell Rodricks to being a makeup artist and grooming coach, Mona Varonica Campbell is loving the many hats she dons.

Mona Varonica Campbell is not just one person, but her own entire entourage. One moment she effortlessly channels her inner “Naomi Campbell” - high cheekbones, power stare et al - as she sashays down the ramp. The next, she is a rather sought after make-up artist, and her own gregarious publicist and manager.

Most endearingly though, she is also her own biggest fan.

At the recently concluded Lakme Fashion Week, walking for designer Wendell Rodricks, as India's first trans plus-sized model, Mona hopes to open up a whole new demographic in the world of fashion.

Being famous before she was famous 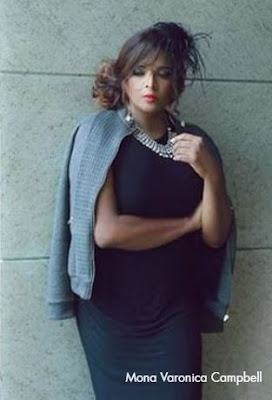 Always somewhat of a fashionmonger, 28-year-old Mona entered the field open to pursuing any avenue and opportunity, and this go-getter attitude is what put her on the ramp. “I grew up studying the design sensibilities of one of my favourite designers Wendell Rodricks, and would often visit his store in Goa and just ogle at his work - the design, the cut and the fabric, no words! And he was one of the judges for the auditions. It was such an honour to be selected by him, and to walk for his line, no less. It’s a dream come true,” she says.

Mona may have gotten her ‘big break’ in the fashion industry only in September with the Lakme Fashion Week, but she feels her entire life has been building up to the moment. “I grew up drawing a lot of inspiration from models like Naomi Campbell and Ashley Graham, one of the leading global plus-size models,” she says.

Armed with a degree in fashion management from the London School of Fashion, Mona started her own makeup studio, Varonica Makeup Artistry, and worked with a host of celebrities and models, besides also specialising in bridal makeup.

Mona’s networking skills and inherent extrovert nature won her many friends and made her a regular fixture of the proverbial Page 3 fraternity. During this phase, she was invited to be the showstopper at a few fashion shows, including Faces of Africa branded by Suchir India, IFSC Fashion Week, and by several local designers. She also got the opportunity to groom students at a leading aviation company. An award for best make-up artist, and ranking as a name to reckon with in the South, this Hyderabad-based girl made her mark with sheer hard work determination.