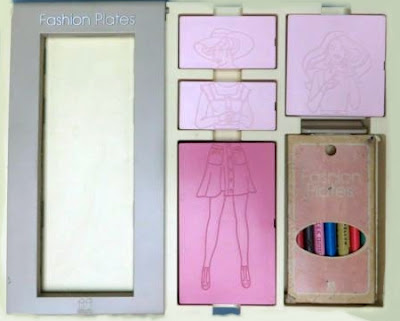 Fashion Plates - Toy from the 80's


There was a toy that I purchased my girls while they were growing up in the 80’s that fascinated me.  I never played with (that is my story and I am sticking to it), but sure was tempted.  I really wish it had been around when I was growing up.  Yes, I would have likely played with it.


The object was to choose plates, that represented, a head, clothing tops, and bottoms as in skirts or pants.  All of the inter-changeable plates had “a flair” to them and the combination allowed for many different styles.  After arranging the plates you inserted a sheet of white paper, ran a black crayon on its side over the plates and your design is transferred. You then have a "fashion combination template" to color and study.   It is still around in a new version.


The girls played a lot with this.  Little did they know that I was watching with envy the whole time.


Does anyone else remember?