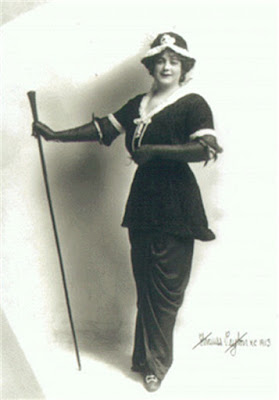 "Woman went into ecstasies over him.
Men went into the smoking Room.”

Julian Eltinge was, without question, one of the most famous female impersonator of all time. His beauty caused him to be dubbed the Mr. Lillian Russell of his day. He was born in Newtonville, Massachusetts, on May 14, 1883, and first donned female attire at the age of ten, when he appeared in the annual revue of the Boston Cadets; apparently, he was so successful in the female role that the following year the revue was written around him. Word of his success reached the ears of a number of theatrical managers, and he was soon appearing in minor productions around the country. Eltinge s first major success came in 1904 when he appeared in Mr. Wix of Wick-ham, a musical comedy with music by Jerome Kern and others.

Eltinge began to make vaudeville appearances, and as early as May 14, 1906, made his London debut at the Palace Theater. The impersonator s New York vaudeville debut came in September of 1907, when he appeared at the Alhambra Theater in an act which included "The Sampson Girl," a skit on Gibson Girls, and "Willie Green," in which he appeared in kid clothes. He was billed simply as "Eltinge," and Variety (September 21, 1907) reported, "The audience was completely deceived as to Eltinge s sex until he removed his wig after the second song. Eltinge will be liked. He is artistic in everything he does, and his act is far and away above what is described as female impersonation." Eltinge s vaudeville success can be attributed chiefly to the beautiful gowns that he wore, which apparently won over the female members of the audience completely, and to a creditable singing voice, far superior to that of most other female impersonators.

In a 1909 interview, Eltinge explained that he spent two hours transforming himself into a woman, with the help of his male Japanese dresser, Shima. Almost an hour would be devoted to his make-up, and Eltinge noted, "It depends on where you put the paint, not how much you splash on."

From Wikipedia: Aside from the graceful femininity he exhibited onstage, Eltinge used a super-masculine facade in public to combat the rumors of his homosexuality. This facade included the occasional bar-fight, smoking cigars, and drawn out engagements to women (though he never married). He was also known to physically attack stagehands, members of the audience and others who remarked on his sexuality. Indeed, his sexual duality led to the creation of the term "ambisextrous" to describe him.