Suits Me - A Double Life 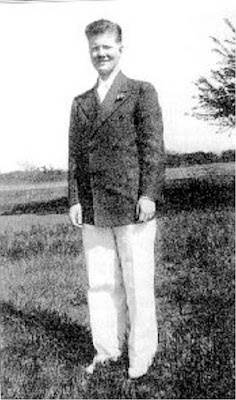 
The book “Suits Me – The Double Life of Billy Tipton” by Diane Wood Middlebrook describes the life of a very interesting female to male cross dresser.  The true story is about a woman named Billy Tipton, a jazz musician who lived as a man from the time she was nineteen until “he” died at the age of seventy-four and then discovered to be female.  The author writes:

…..And Dorothy really tried to find work. She went looking for a job and just couldn't find one.


But the cousins were there the day Dorothy finally figured out what to do about that.  "Some way or another Dorothy heard about a band that needed a saxophone player”, Eileen recalled. "Back in those days you know they didn't have girls traveling with bands it was just frowned on.  Anyway, she wasn't helpless and appealing looking like you'd expect a woman to be.  So she said, 'Well, if can't go as a woman, maybe they'll take me as a young man!'
She took a piece of old worn out sheet and wrapped it around her chest and pinned it real tight.  I never will forget the big safety pin we used in it!  Some way she had picked up some clothes.  Dressed as a boy, she got this job and left with the band."  Madeline added, "That's what I admired and loved about Dorothy, she was so innovative!  She didn't cry or go around asking for help, she took responsibility for herself, and she was, just a kid.  She chose it out of absolute necessity. What were the alternatives?  A girl in her position might have ended up a prostitute.


In an inscription on yet another photograph she submitted for inclusion in Reggie's [her mother’s] album.  Date able to 1935, this is the earliest known photograph of Dorothy wearing a man's slicked-back hairstyle and a man's clothes: a tie; white shirt, pants, and shoes; dark double-breasted blazer with a boutonniere.  On the back of the snapshot, in Billy's handwriting, is penciled the note "Your Child/Graduation." Perhaps labeling her cross-dressing as the equivalent of a high school commencement was intended as a joke that would give the family a way to accept it.


It is amazing the similarity between this real life story and the movie comedy “Tootsie” with Dustin Hoffman playing a man that could find work, only as a woman.