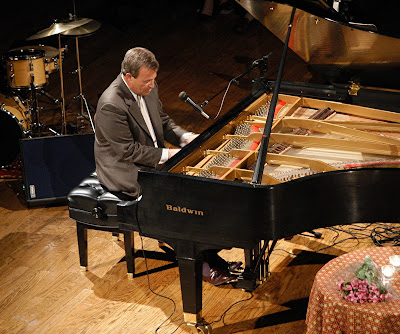 I love Jazz.  I am latecomer to the genre having grown up with the Beatles but none the less a lover now.  A few years back I belong to the Palm Beach International Piano Society.   We sponsored many classical musical concerts locally but drew international talent.  Several of our members were trained concert pianist and could judge and analyze.  For that reason, we attracted international talent to come and play to have their  works listen to by those who could offer a critique. I will write more later on some of the wonderful friends I made.


So, what is the connection to Jazz.  Many times our program was presented in two parts.  A classical concert,  Mozart, Beethoven, Debussy…. and then a more contemporary artist to round out the evening.    I made a wonderful friend  -  one of our jazz artist, Norm Kubrin.  As the self appointed event photographer for all of the concerts, I got many beautiful photographs like the one above.   When Norm put his songs to CD, I did the photography work for his CD covers and web site.  An honor.

All of this came from getting out, volunteering and being myself.....

Here is a little about Norm from his site NormKubrin.com.   Sample his music and buy his CD’d if so inclined.  Norm is suffering from cancer and I wish him my best.  A good friend.

Norm was born in New York City where his passion for music would quickly become obvious to all who knew him.  His nursery school teacher recalled a time when Norm toddled up to a piano and played an entire melody without any training or guidance whatsoever.  Hearing this, his parents acted quickly and bought Norm his first piano.  From that moment on music was his whole life, and it still is.

Norm’s teen years were spent rebelling.  Not in the manner you might think, he was rebelling in the music studio.   As foretold by that moment back in nursery school, Norm’s music education continued to be self-taught.  “I learned by listening to other people play and then I just played it back”,  he says.  “I pretended I was reading the music just to make the teachers happy.

”His teachers may not have caught on, but apparently Norm was onto something.  His first professional performance was at Radio City Music Hall.  He won it as a prize on a televised amateur contest which one might consider the predecessor to American Idol.

The votes were in.  Norm’s star was born.