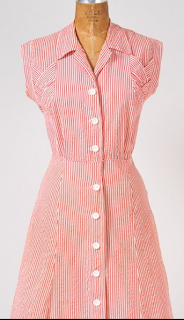 Growing up in my little town in Virginia we had one hospital serving the whole county.  Many of the girls in my high school volunteered at the hospital after school as a "Candy Striper".  I loved the look of the  red-and-white striped pinafores that looked like candy canes.  It was not that I saw myself as becoming a nurse or health care provider, but I did really enjoy the cute look of the uniform/dress.   I guess some were dresses and others were more a pinafore worn with a white blouse.  It was common to see them after the last period in high school wearing their dresses waiting for rides to the hospital.

I am not sure that this is still a volunteer activity today and the cute dresses seem to be relegated to a costume.  Although recently I did see the pinafore style on Ebay.   VINTAGE-1960s-CANDY-STRIPER-UNIFORM-DRESS-VOLUNTEER-NURSE-COTTON-PINAFORE

Was your sister a "Candy Striper"?  Did you every try the uniform?  Maybe a costume?  Memories?   Please share.

A candy striper was traditionally a young, female hospital volunteer -- a concept that originated in the 1940s. The unique job title referred to the candy cane look of the red and white-striped pinafores worn by the volunteers. Traditionally, the girls sewed their own pinafores. East Orange General Hospital in New Jersey started the first candy striper program in 1944.

During the 1950s and 60s, the popularity of candy stripers was widespread. In general, the goal was to make a patient's stay in the hospital more pleasant. Initially, the girls simply delivered mail or patient meals, but as nurses became overburdened, the volunteers took on additional duties. Now, a candy striper might help feed, or read to, a patient; assist as a patient is discharged; or deliver messages. Other duties include transporting book or video carts to patient rooms. 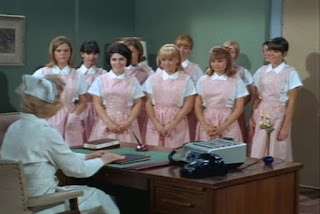