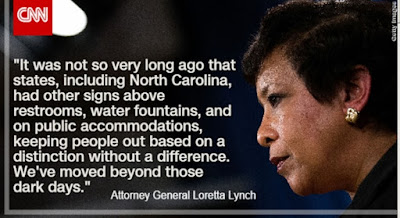 On Monday U.S. Attorney General Loretta Lynch condemned a North Carolina law restricting transgender people’s use of bathrooms in strong language, comparing it to segregation. Here is what she said to us:

Let me also speak directly to the transgender community itself. Some of you have lived freely for decades. Others of you are still wondering how you can possibly live the lives you were born to lead. But no matter how isolated or scared you may feel today, the Department of Justice and the entire Obama Administration wants you to know that we see you; we stand with you; and we will do everything we can to protect you going forward. Please know that history is on your side. This country was founded on a promise of equal rights for all, and we have always managed to move closer to that promise, little by little, one day at a time. It may not be easy – but we’ll get there together. Personal Notes on Ms. Lynch:  Loretta E. Lynch was sworn in as the 83rd Attorney General of the United States by Vice President Joe Biden on April 27, 2015. President Barack Obama announced his intention to nominate Ms. Lynch on November 8, 2014.

Ms. Lynch is the daughter of Lorenzo and Lorine Lynch of Durham, N.C., a retired minister and a librarian whose commitment to justice and public service has been the inspiration for her life’s work.

Let us do our part to be visible, represent our community well and support those that are supporting us.
Posted by rhonda's escape at 7:05 AM