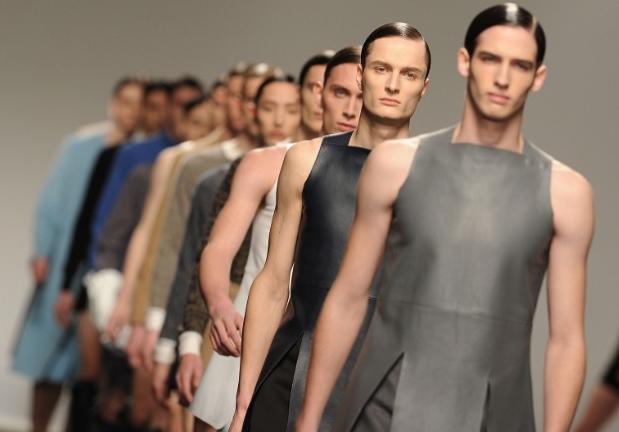 There's often a thin line between J.W. Anderson's menswear and womenswear collection. In any case, it seems his designs appeal to both groups: he won the 2015 British Fashion Awards for both categories.

See my note below.


When writers and filmmakers depict the future, they often include one strange detail: men and women dressing alike.

From the leather coats and sunglasses of The Matrix to the faded blue coveralls of Nineteen Eighty-Four, one of the characteristics of the imagined future is a break from gendered clothing, which is replaced by something more functional and utilitarian. It's a world of zippered jumpsuits, where a corset or tie is as exotic an artifact as a fossil from the Pleistocene Era.

Gender, these futurists seem to be saying, is an artifact of a less-progressive past. But is the future now?

Recently, fashion designers like Gucci and hip boutiques have begun selling what's being called gender-neutral or gender-free clothing: clothes that can be worn by either men or women. (Both The New York Times style section and The Guardian have recently covered this trend.)

Then there was Target's announcement in August that the retail giant would be eliminating gendered language in its children's toys and bedding, transgender celebrity Caitlyn Jenner's Vanity Fair cover and singer Miley Cyrus' self-identification as gender-fluid.

But before we raise a toast to a world of post-gender fashion, it's important to differentiate between marketing and actual progress towards gender equality. To be sure, fashion can advocate for social change. But just as often, fashion will exploit social movements, aestheticizing them as a way to seem edgy and turn a profit.

To understand what fashion means, we have to place it into its historical context. Likewise, we can't understand clothes outside of the society that gives them meaning -- or apart from the industry that makes and markets them.

In my research, I've studied how subcultures in the United States have used clothing to create communities that are critical of mainstream values. And there's a long history of gender lines being blurred in clothing as a way to demonstrate equality of the sexes or freedom from sexual roles.

Founded in 1824, the New Harmony socialist utopian community let men and women both wear trousers. It was borderline-scandalous for the era, but representative of their vision of gender equality. In the late 19th century, women's rights advocate Amelia Bloomer famously argued for the right of women to wear pants -- called bloomers -- under their shortened

In less political subtexts, like the counterculture of the 1960s, unisex styles differentiated hippies from middle-class society. While this allowed hippies to recognize one another as people with similar values, looking different could also be dangerous. During filming for the counter cultural road movie Easy Rider in parts of the South, actors Peter Fonda and Dennis Hopper discovered that men who grew their hair long were often asked whether they were a boy or a girl -- and not in a friendly way. These real-life experiences were incorporated into the film's violent ending.

But before we raise a toast to a world of post-gender fashion, it's important to differentiate between marketing and actual progress towards gender equality.


When hip-hop became a nationwide cultural phenomenon in the 1980s, male and female breakdancers -- also known as b-boys and b-girls -- wore tracksuits and other athletic clothing while they performed, blurring gender roles for a shared physical ability.

All of these examples happened organically, outside of the fashion industry. They show how people -- especially those on the margins -- adapt and remix the clothes that are available to them, fashioning new styles and new meanings in a process that anthropologist Claude Levi-Strauss has called "bricolage."

The motives of the fashion industry

On the other hand, when the fashion industry promotes unisex styles -- like the Peacock Revolution of the late 1960s or the groovy styles of the 1970s -- it's always tied to making money.

So while today's unisex fashions may seem like another benchmark for equality, it's rarely progressive when you look at it through the lens of a lucrative fashion industry that's looking to turn a profit.

Fashion, ultimately, is an industry that trades on notions of exoticism and aesthetics; to achieve these twin ideals, designers have historically exploited the oppressed or downtrodden.

For example, in 2010, haute couture company Rodarte released a line of clothes and cosmetics inspired by the women who work in the maquiladoras, or factories, along the Mexico-US border. Poorly paid and often the victims of gender-based violence, these women's lives became the source material for expensive clothes they could never afford and lipsticks with names like "Factory."

Equally repugnant was model and fashion designer Erin Wasson's claim in 2008 that "The people with the best style for me are the people that are the poorest. Like, when I go down to Venice Beach and I see the homeless, like, I'm like, 'Oh my God, they're pulling out, like, crazy looks and they, like, pulled shit out of like garbage cans.'"

African Americans have long been used by the fashion industry in this way. Posing Brazilian model Gisele Bundchen in the arms of screaming basketball player LeBron James on the cover of Vogue in 2008 was a not-so-subtle echo of racist images that depicted vulnerable white women threatened by animalistic black men. In the case of Taylor Swift's colonial fantasy video for "Wildest Dreams," blacks are entirely absent from its African locale. And fashion magazines have been known to "black up" white models rather than hire black ones.

In all of these instances, racial differences, poverty and violence are repackaged as "exotic." Aestheticized to appeal to our eyes, they create a clear distinction: there is us (the mainstream consumers) and them (the outsiders we are fascinated, disgusted or thrilled by). 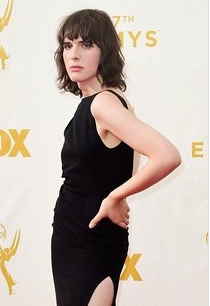 The fashion industry's current attraction to unisex or gender-free clothing may be similar. While transgender models like Andreja Pejic and Hari Nef (shown right) walk the runway and appear in fashion magazines, the real difficulties facing transgender individuals are often ignored. This is doubly true for transgender women of color who are the victims of shocking amounts of violence.

Given the fashion industry's historically poor record of including African Americans as models or designers (outside of the urban fashion niche), it's unlikely that it will be any more progressive when it comes to portraying the reality of the lives of transgender people of color -- or in employing them behind the scenes.

Probably more than any other daily act we engage in, clothes are how we convey our identity to the world. For that reason, they are important. They can be used in radical, subversive ways.

But before we congratulate the fashion industry for   making gender distinction a thing of the past, it's important to understand its motivations, its practices and its limitations.

My Note: How do you feel about men and women dressing alike? What happens to the "The Feminine Differential" that we love?  I know - not in our(my) lifetime, but in the future?  Please comment.