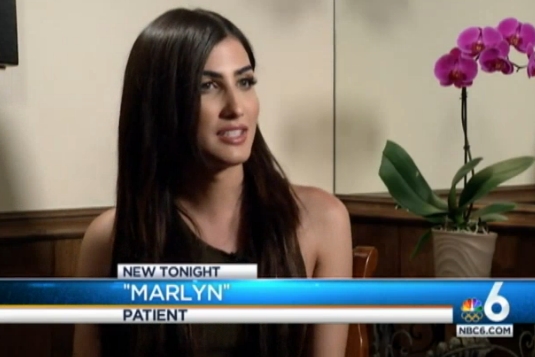 A South Florida transgender woman says she's finally feeling like herself after undergoing a life-changing procedure that makes her feel like the person she was born to be. NBC 6's Marissa Bagg has her story. (Published Monday, May 2, 2016)

A simple knock at the doctor's office door doesn't reflect the journey 23-year-old Marlyn has been on for several years.

"I'm so happy with the results. I feel like I look like me and at the same time, it addressed a lot of anxieties I had about my face," she said.

The FIU student was anxious about her looks, not because she's vain, but because it never reflected who she is inside.

Marlyn is transgender, born male but truly a female. Her transition is her life's biggest challenge, often with dangerous twists and turns.

"There was self-harming going on. I constantly went to bed hoping either I'd wake up as a girl or not wake up at all," Marlyn expressed.

That was years ago. Now with support from family and friends, she is the woman she always pictured herself to be.

The final part of the puzzle was face feminization surgery performed by Dr. Vartan Mardirossian in Jupiter.

"You have to find the right way to reflect and express their interior world on the exterior," Dr. Mardirossian said. "When you're doing the procedure, you converse with them, you're trying to look at their face through their eyes, to achieve the result they want."

Hundreds of male and female patients have gone under the knife with Dr. Mardirossian, about half are transgender.

Some surgeries are done over a series of months, while others can be done in one day. For example, one patient had all the procedures in one day. It started at 8 a.m. and went to 5 p.m. It was a marathon for Dr. Mardirossian in the operating room. Marlyn had five procedures done at once in late February. Her personal path to self-acceptance took much longer.

"I resisted it. I told myself, 'You're a boy, you're a boy.' And there's only so long you can do that before you crack," she said. But after mental and now physical changes, she has come into her own.

My Note: Vartan is my doctor, business associate, and friend.
If you go to Dr, Mardirossian's Site there are before and afters for Marlyn.