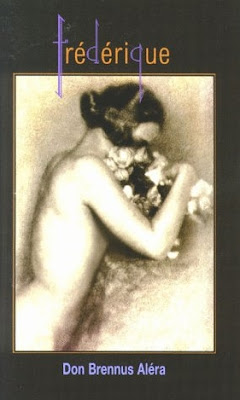 Before Chevelier Publications, Reluctant Press and Sandy Thomas Novels there was "Frederique".

I picked up a copy of this interesting read on eBay a few years ago.  I had been hearing about this little fascinating story for years and was not at all disappointed when I got to read it.  Going back to our discussion on the perfect transgender story, this fulfills the criteria. First written in French and translated by Pamela Carfax into English, it was originally published in 1921.  This title is one of the century's most famous transgender tales. Even after almost 100 years, it still represents an universal theme for us.

In 1921 Select Bibliotheque of Paris published this remarkable novel of enforced cross dressing and sexual titillation. A much sought after cult novel now translated into florid English for the first time by Valerie Orpen. A young orphan, Fred de Montignac, is left in the charge of his aunt, the Baroness Saint-Genest, an imperious aristocratic woman eager to dominate and transform her youthful charge into a docile and lovely young lady, Frederique. During this process of change the Baroness uses him as her personal slave and sissy maid, administering various forms of discipline to ensure his complete obedience and ultimate compliance. Although contemporary accounts and non-fiction studies of cross-dressing abound, Frederique is one of the rare novels to chronicle transvestism. The sixteen exquisite illustrations, reproduced from the original edition, portray every stage of Frederique's gradual subjugation and enforced feminisation.

Barnes and Noble describes it this way:

First published in French, Frederique offers a delightful look at attitudes toward cross-dressing during the 1930s. Fred de Montignac, a young aristocrat of nineteen, is taken to live with his aunt, the Baroness Saint-Genest, an imperious woman who insists that the young man adopt women's clothing and assume the persona of a lovely young lady, Frederique. Quaintly kinky, Frederique is a pleasure to read, and its historical place among transgender erotica is undeniable.

There is an entire chapter on the "less than voluntary piercing" of Fred's/Frederique's ears. Here is an excerpt from that chapter:


This too was part of Madame de Saint-Genest's plan. She wanted the patient to be able to see her. To see as well as feel. It was not simply a question of having his ears pierced. They must be pierced by his aunt herself, by the woman who had wanted to surpass her own beauty and had succeeded. Fred must have no doubt as to the identity of the hand that inflicted the pain and forced a mark on him. The image of that radiant and statuesque creature must remain forever linked to the memory.....

"It's time," said Leontine. "Frederique I beg you to keep quiet and not irritate me. I need a completely steady hand if I am to hurt you as little as possible."

....... Just as she felt proud to have marked a creature, Fred felt ashamed at having been marked, twin sentiments that may often be observed when two people confront each other and one succeeds in dominating and domesticating the other. It was therefore not difficult to predict that sooner or later a mistress-slave relationship would certainly develop between aunt and nephew, if the Baroness was willing to take the trouble to cultivate it. And she was willing. She was very willing indeed.

Fred was often to relive in his dreams the painful initiation ceremony that marked the beginning of a new existence for him.

His way of thinking had already been altered by the shock he had suffered. In the past, he had still occasionally remembered he was a boy, convinced he was wearing a temporary disguise. But no longer. He now really thought he had changed sex, He was still innocent, and the idea had taken root in his mind that he could never be a boy again because he had been permanently changed into a girl by means of a painful and bloody operation.

This conviction made Madame de Saint-Genesfs task easier. Fred agreed to wear the dresses, bodices, high-heeled shoes, and narrow corsets that were given to him. He agreed to sew and do tapestry work. Most important of all, he answered with good grace to the name "Frederique", a name he had previously found hateful.

It took a month for his ear to heal completely and Leontine, taking advantage of the shock her nephew had suffered, used the time to drill into him every last little detail of how a girl should behave. With time, and through force of habit, she knew he would eventually acquire the tastes that accompany such behavior.