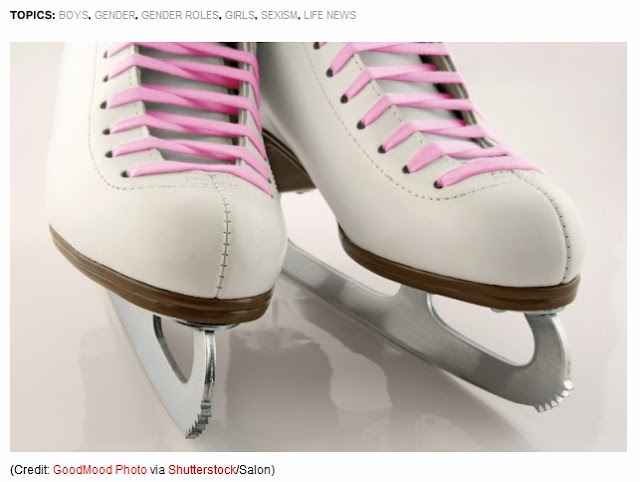 Rhonda's Note:  I came across this article and love the message.  I have written before how I was raised in a marvelous environment where my grandparent tolerated my multi gender existence.  In the morning I would play with dolls and later that day I would play with trucks.  Never, was I criticized or made to feel that this was anything but normal and OK.  I am sure I was the exception and most of my fellow sisters were not so fortunate.  I self-limited as I got older, but never let the girl screaming inside to go unrecognized or silent.  This article deals with the fact that masculinity as it is taught today, is dehumanizing.  Interesting Read:

5 Ways America Tells Boys Not to be “GIRLY"
By:Soraya Chemaly

The ability to feel what others feel has many well-documented benefits, including, for empathetic people, greater psychological and physical health. The real and socially significant positive impact of empathy, however, is the ways in which it affects behavior toward others. People who are empathetic are less aggressive and prone to denigrate others; they are predisposed to act with care and compassion; they have increased egalitarian beliefs and act with less prejudice and stereotype-based hatred. Empathetic behaviors, however, are associated with being female. And weak.

Expression and empathy are closely related for children. When boys are taught that they can’t “be like girls” it has the threefold effect. First, it alienates them from core aspects of themselves. Second, it portrays what is feminine as undesirable and inferior. Third, it forces boys into a “man box” from which emotions and empathy are excluded.  An upcoming documentary, “The Mask You Live In,” carefully examines, from the perspective of boys and men, what this feels like and means in their lives.

While more and more parents are openly grappling with how to handle “non-conventional” gender behavior in children, many others won’t even consider the behavior as remotely acceptable. The policing of boys’ gender expression doesn’t require parents who yell, “Stop crying, you sound like a girl!” or homophobic classmates hurling some variation of “Don’t be so gay!” (which is, sadly, still a serious problem). A whole range or rules, traditions, daily interactions and media content come together to narrow boys’ options and, ultimately, abilities. Consider these five everyday ways that boys are taught first not to look like girls, not to be like girls, not to do “girly” things, and then, ultimately, to lose the ability to feel compassion.

The five ways America tells boys not to be “girly”: Clothing, Hair, products, Sports, and Stories.


This all happens way before boys’ sexuality becomes an issue and when boys are subjected to pervasive messages telling them to objectify girls, be sexually promiscuous and boast about it.  No wonder some men are able to go through life never once considering what it’s like to be a woman or why it matters.


The boy crisis we should be focusing on is how “boys will be boys” ideas and sexist media leave boys ill-equipped to function in diverse societies.  School aren’t emasculating boys, American masculinity is dehumanizing them.