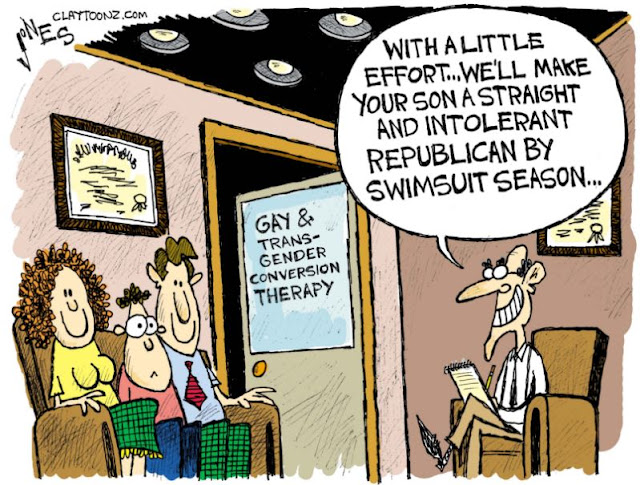 Just in case you think this is absurd take a look at this Time Magazine article and portion quoted:

The Republican Party’s platform is taking a turn for the right.

As GOP delegates gather in Cleveland to formulate the party’s principles document, social conservative priorities have dominated the discussion, with several provisions opposing same-sex marriage and endorsing controversial conversion therapy... The platform committee approved several of the measures in a sometimes-heated discussion between social conservatives and more moderate Republicans that represent a more conservative shift from the draft platform authored by Republican National Committee staff and outside advisers....


This and other provision of the Republican Party’s platform were approved by uncontested voice vote on the first night of their convention.


I got a response on my "Be Worried" post last week so let's see if this shakes anyone up. Please comment if you have an opposite view to relate. That is what politics is all about.

Growing up the funnies were my favorite section of the Sunday paper.  I will include a political cartoon occasionally when relevant.  I welcome your comments and feel free to express your views at any time.
____________

I have no upcoming trips until the end of September and the first week in October.  September 29, 30 and October 1 I will be at the Southern Comfort Convention in Fort Lauderdale.  October 3-10 I will be in Asheville NC,   Southern Virginia (50th high school reunion) and then back in Jacksonville FL October 10th, for business.