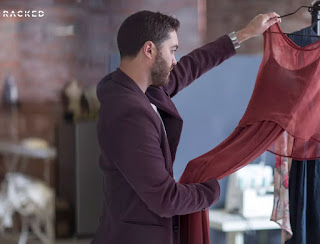 Personal Note: Here are several paragraphs from an article published at the now defunct site, Racked. The whole article is still there and the best tease are the sidebar quotes.  Read The whole article - Fascinating. It draws amazing conclusions as when (if ever) men will be able to gender bend as easily as females. We do it, however with suspicion and danger.  Read the whole article and let us all together say "AMEN SISTER"!

Not once have I had a guy who, after offering to make breakfast in the morning, stood up, stretched, and grabbed one of my shifts off the floor so he didn’t have to fry up a couple of frittatas in just his socks. Never has a man walked from my room with a dress skimming the tops of his hairy thighs, the short hem flashing cheek as he rooted around for pans, the strap falling all come-hither-like down his shoulder — and me watching all of this from my bed, biting my fist.

We’ve seen this same scenario play out a hundred times over with women wearing men’s shirts, but never really the other way around, at least in the United States. And you have to wonder: why not?


“Isn’t it queer that for a boy to want to be a girl, and look like a girl, and dress like a girl is so unusual that it fills his parents with fear that he is abnormal, whereas virtually every girl in the world wishes she were a boy?”


“The display of skirts on men is effectively an undermining of male power — by males. To put it extremely, they are like deserting troops.”


“[Pants and skirts] don’t have equivalent power, or potency, or symbolism.”


“Boys learn that the girl rules are forbidden territory. If you trespass over there you’ll get smacked down, sometimes literally.”


“Wearing a skirt to me (female) is just like wearing a pair of pants — it makes no difference. If the outfit looks better with a skirt, then I’ll wear the skirt.”

Fashion isn’t just a public manifestation of gender, but also a private one. “Certainly fashion and clothing are how we present ourselves to the social world and how we’re read by others, but it’s also very much about how we read ourselves,” Ben Barry, associate professor of equity, diversity, and inclusion at the Ryerson School of Fashion, says. "There’s this intimate connection we have with clothes — it links how we feel in our bodies and who we feel we are inside."


“Clothing makes you aware of the edges and boundaries and borders of your body,” Barry says. “So wearing a dress, wearing women’s garments, even in the privacy of your own home, connects you to your body in a way that could make you feel comfortable or uncomfortable with how you perceive yourself.”

As the advice columnist from 1938 pointed out, “We would send a man who paraded the streets in a decollete gown and high-heeled pumps to an asylum for mental observation, whereas a girl who gets herself up like an imitation man goes scot-free.” Not until men can just as freely put on chiffon dresses as women could put on trousers, can we say that we have figured it out.