I started delivering The Richmond Times Dispatch Newspaper and the Richmond News Leader as a preteen and held the job for three years, until I went to high school. The route included my whole small village from end-to-end and I delivered both the morning and evening paper. The morning news took about a hour every morning before school and the evening news about a half hour. Those mornings gave me an appreciation for the news and I would read the paper as I rode on my bicycle.

The daily funnies - Blondie, Dennis the Menace - Beetle Bailey - Nancy and Sluggo - were my favorites. I also learned that over on the opinion page in just a single "frame" the depth of a very complex subject could be illustrated and unraveled. My love for political satire was born.

History in school helped me to understand that American journalism had a rich history in satirical illustrations like the one below. 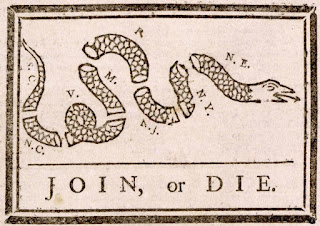 A May 9, 1751, Benjamin Franklin's satirical illustration in the Pennsylvania Gazette

Which brings me to today's featured illustration. Did it go too far?  Some may have thought that the de Adder cartoon below, went too far by depicting the golf-loving Trump as oblivious to lifeless bodies. A desperate situation he has fostered. The subject even sparked a viral moment at the first Democratic debate. So can political satire go to far?

My opinion: No good journalism can come from fear; fear of retribution; fear of losing one job or fear of political/social ire. Democracy demands that there be public debate. Even if you do not agree. 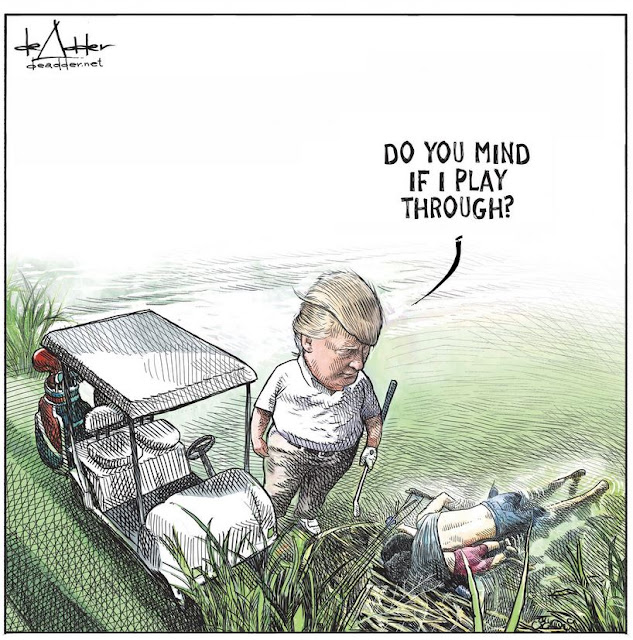 According to the Huffpost, cartoonist Michael de Adder’s contract with four Canadian newspapers was terminated last week after one of his political cartoons lambasting U.S. President Donald Trump went viral on social media. His cartoons, de Adder tweeted, “will no longer appear” in the city’s four local papers — the Telegraph-Journal and its Saint John edition, the Times & Transcript and the Daily Gleaner".

De Adder, who’d worked for the newspapers’ publisher for 17 years before his dismissal, suggested Sunday that he was let go for being too critical of Trump. But Brunswick News Inc. said earlier in the day that it was “entirely incorrect” to suggest that de Adder’s freelance contract was terminated because of the Trump cartoon.

De Adder did state further: “I will defend myself. And I will talk about why I think I was let go,” the cartoonist wrote, adding that he was sharing his perspective “reluctantly” and was only doing so because “I feel my credibility is on the line.”

Another along the same vein. 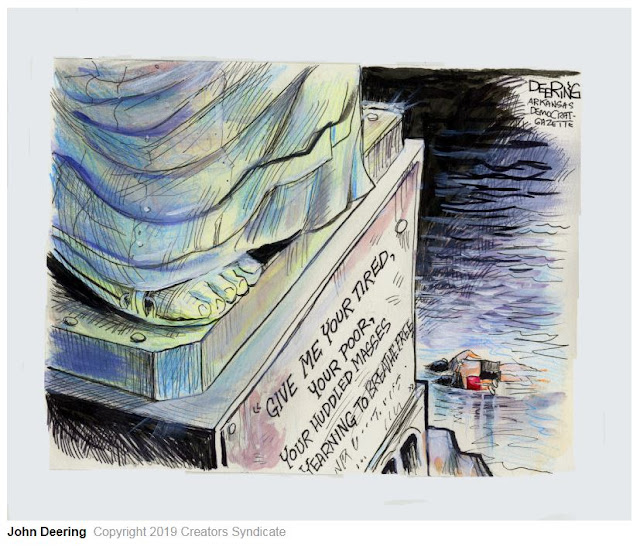