Just When I Thought It Couldn't Get Any Worse 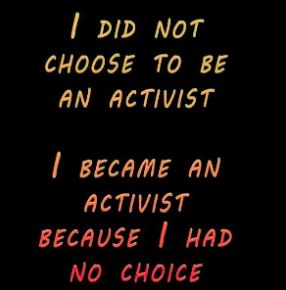 The Trump Administration continues its all- on attack of our community. This is mean- spirited and takes away a protection that will prevent us from working, simply because we are transgender. Some businesses will see this a chance to fire a transgender person for no other cause than the person's gender identity. With e-verify and employment application questions it is already difficult to get a job and now with this in place, any transgender person's job is at risk; during transition or being outed while working.

If you are a casual "cross dresser", do not think that makes you safe.  Already this has occurred - Oiler v. Winn-Dixie Louisiana, Inc.

It is difficult for me to understand how anyone in our community could still support Trump. This has moved me from the outspoken category to the activist state. I will do all that I can do to prevent another four years of this outright attack on our rights.

Without Justice Department support, as we have had in the past, our best hope is that the Supreme Court will rule that our transgender rights will continues to be protected under Title VII. I.e. - I believe that there are still reasonable Supreme Court judges.  Going forward, that could be subject to change.

The Supreme Court is considering three cases that look at whether LGBTQ employees are protected under federal civil rights law.

The Trump administration is asking the Supreme Court to set a legal precedent that would make it OK for an employer to fire a person for being transgender.

In a brief filed Friday, the Justice Department argued that Title VII of the Civil Rights Act of 1964 only protects workers from discrimination based on their “biological sex.”

The Supreme Court agreed earlier this year to hear three cases that look at whether Title VII, the federal civil rights law that prohibits workplace discrimination, applies to LGBTQ workers.

Friday’s brief pertains to one of the lawsuits, R.G. & G.R. Harris Funeral Homes Inc. v. Equal Employment Opportunity Commission, in which a transgender woman was fired after she transitioned.

Aimee Stephens had reportedly presented as a man when she began working at R.G. & G.R. Harris Funeral Homes in Michigan in 2007. The company’s owner, Thomas Rost, fired her six years later, when she announced her plans to transition.

The U.S. Court of Appeals for the 6th Circuit ruled that Stephens’ firing was discriminatory.

“The unrefuted facts show that the Funeral Home fired Stephens because she refused to abide by her employer’s stereotypical conception of her sex,” the court wrote in a 49-page decision.

“Discrimination against employees, either because of their failure to conform to sex stereotypes or their transgender and transitioning status, is illegal under Title VII,” the court said. “It is analytically impossible to fire an employee based on that employee’s status as a transgender person without being motivated, at least in part, by the employee’s sex.”

But the Justice Department argued on Friday that “the ordinary public meaning of ‘sex’ was biological sex” when the Civil Rights Act passed in 1964.

“It did not encompass transgender status, which Stephens and the Sixth Circuit describe as a disconnect between an individual’s biological sex and gender identity,” DOJ lawyers wrote. “In the particular context of Title VII — legislation originally designed to eliminate employment discrimination against racial and other minorities — it was especially clear that the prohibition on discrimination because of ‘sex’ referred to unequal treatment of men and women in the workplace.”

Chase Strangio, a staff attorney at the American Civil Liberties Union, which is representing Stephens in her suit, argued that the case has implications beyond the trans community.

“People don’t realize that the stakes are extending not just the trans and LGB communities, but every person who departs from sex stereotypes: Women who want to wear pants in the workplace, men who want more childbearing responsibilities. Those protections are also in peril with the arguments advanced by the Trump administration, presented at the Supreme Court,” Strangio told HuffPost.

He added: “There isn’t a coherent way to carve out LGBT people without changing the standard that exists under the law.”

The Supreme Court is also looking at two cases of employees fired over their sexual orientation: In Altitude Express Inc. v. Zarda, Long Island skydiving instructor Don Zarda was fired after he told a client he was gay. Last year, the U.S. Court of Appeals for the 2nd Circuit ruled that Zarda’s firing was discriminatory. But the 11th Circuit, in a similar case, Bostock v. Clayton County, Georgia, ruled that precedent suggested Title VII did not protect against discrimination based on sexual orientation.