Decoding Genderless Fashion, The Future of the Industry?

Genderless fashion designers and global retailers discuss the segment predicted to be the future of the industry.

So, what must be addressed for things to move forward? Retailers must reassess their merchandising strategies, designers must reevaluate what a genderless collection actually is, and the industry must learn the verbiage.

Smith at the WWD Culture Conference used a character called the “Gender Unicorn” to illustrate the proper way to address gender and sexuality. He spoke of five things related to identity, including the sex one is assigned at birth, gender identity, gender expression, who one is intimately attracted to and then who one is emotionally attracted to.

The parts that are pertinent to fashion are gender identity and gender expression. To start, a person can be assigned one of three sexes at birth: male, female or intersex. Then comes gender identity, which is what one identifies themselves as and gender expression, which is how one dresses to express themselves. Smith started his speech identifying himself as a “cis man,” meaning he was assigned male at birth and identifies as male.

Why is this important? Smith explained at the conference that when he was young, sexuality and expression were lumped together, “but now it’s all about separating your sexual orientation with your gender identity.”

Christina Zervanos, head of public relations at Phluid Project, said the non-binary consumer “combats the word unisex, because it has the word sex in it. For a lot of people, it speaks to sexuality when it’s about how you identify yourself.”

“Gen Z is begging for the non-binary language,” Zervanos said. “It takes a lot of learning and unlearning.” According to Pew Research Center, 35 percent of Gen Z is familiar with gender-neutral pronouns, followed by Millennials at 25 percent. Throw in Gen X at 16 percent and the total number of people familiar with gender-neutral pronouns reaches 76 percent.

“Personally, I find there is a difference between the two terms,” said Brigitte Chartrand, Ssense senior director of women’s wear buying. “Unisex feels like an older term, which refers to designs that are not made for a specific body type. Whereas gender-fluid is more of a loose term that can be applied to clothing that embraces or rejects typical gender norms of design. Regardless of specific definitions, I think both terms are about welcoming a community of like-minded individuals with a focus on inclusivity.”

Montreal-based retailer Ssense embraces gender-fluid fashion through store buys that blur the distinctions between men’s wear and women’s wear. Though the Ssense homepage opens with “shop men” and “shop women,” Chartrand said the lines have been blurred for five years and merchandising is determined by aesthetics, if a product appeals to the Ssense customer, and years of buying data.

We don’t categorize our brands as ‘unisex’ or ‘gender-fluid’,” Chartrand said. “We’ve had this approach for many years. Our audience is predominantly aged between 18 and 34, so they’re generally more open-minded and readier to embrace new ideas. It’s more about differences than difficulties. Cut, fit, sizing and styling can all be major considerations.” 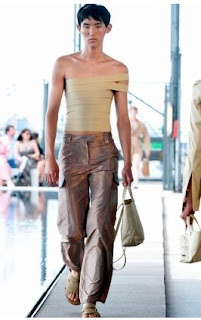 Many brands are adopting the language, describing their gender-neutral collections as genderless, like Official Rebrand, the genderless label from non-binary designer and creative MI Leggett. They actually coined the term “gender-free.”

“Gender is not a fixed thing,” said Leggett, whose pronouns are they/them. “I’d never heard people use the term gender-free when I started the brand. It’s kind of a play on gluten-free. If you don’t tolerate gluten, you don’t have to consume it, so I thought it was a funny play. A lot of people use gender-neutral. That feels a little stale to me. Free implies more freedom. Agender, genderless, there’s so many ways to describe your ideology as a brand. It all depends on what you actually mean. So to me it’s gender-free.”

Read the whole article - It is fascinating and a very insightful view in to where genderless may be be headed...