I Love A Success Story - Leslie and Deborah

My cross-dressing husband became my wife
and we're still in love!

By Rebecca Wright
12 APR 2015
Last year, boxing promoter Frank Maloney, 61, shocked the world of sport when he declared he was having a sex change to live as a woman, Kellie.  And it’s rumored that former Olympic athlete and Keeping Up With The Kardashians star Bruce Jenner plans to undergo gender reassignment surgery. These decisions can’t have been easy for their families and friends to accept.
One woman who knows just how they might be feeling is social worker Leslie Hilburn Fabian.
After her husband David spent many years suppressing the desire to dress as a woman, he is now Leslie’s wife, Deborah.
These days, as well as still enjoying the hobbies they shared together, like bike riding, Leslie can be found shopping with Deborah, or swapping advice on hair styles. They’ll also flick through Deborah’s favourite clothes catalogue, searching for another turquoise or purple dress – the colours she adores and feels happy in now she’s a woman.
Leslie first met David, an orthopedic surgeon, in 1987 through mutual friends. She was attending a discussion at a fellow social worker’s house about different lifestyles, and David was giving a talk about cross dressing – while dressed as a woman himself. 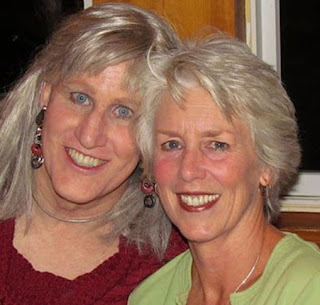 Leslie wasn’t put off by his outfit. She remembers, "I was immediately attracted to him. He was over 6ft tall with amazing aquamarine eyes. And even though he wore woman’s clothes, he didn’t behave in an artificially feminine way and he had a deep voice. His openness and honesty about his situation were attractive to me."
The couple married in 1991 and in an attempt to live with David’s cross-dressing, they agreed he would have the odd weekend or night as Deborah.

The couple married in 1991 and in an attempt to live with David’s cross-dressing, they agreed he would have the odd weekend or night as Deborah.

‘I am happy almost all the time now. Much of the time I don’t even think about what I’m wearing. I am just me. This is surprising to me, because I always used to be very aware of anyone looking at me. My life hasn’t changed a lot, except that I now do everything as Deborah, female, as opposed to David, male.