It’s hard to imagine punk rocker Laura Jane Grace as anything other than a transgender icon, but there was a time when she didn’t even know what to call herself. 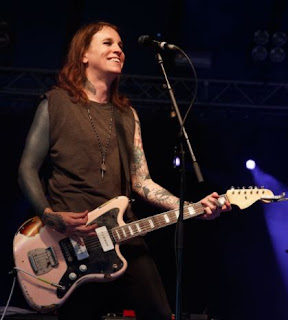 When Grace rose to fame in the 2000s as the lead singer and founder of Against Me!, she was closeted and navigating gender dysphoria privately, although it had begun to seep into her songwriting. She came out publicly in 2012 and later incorporated her experiences into albums like 2014’s Transgender Dysphoria Blues and 2016’s Shape Shift With Me, as well as Tranny: Confessions Of Punk Rock’s Most Infamous Anarchist Sellout, her debut memoir. Almost a decade later, Grace has joined forces with Audible’s Words + Music initiative to reflect on her journey in Black Me Out, her new audio memoir, out today (September 2).
Narrated by Grace herself, Black Me Out blends conventional memoir with stripped-down recordings of the Against Me! songs that soundtracked her transition, including “I Was A Teenage Anarchist,” “Walking Is Still Honest,” and “The Ocean.” (Savvy Against Me! fans will note that the Audible project is named after the closing track from Transgender Dysphoria Blues.)
In an exclusive new clip from Black Me Out, Grace recalls experimenting with “cross-dressing” prior to 2012. This was well after Against Me!’s debut, so Grace feared how being her authentic self would impact the career she’d worked so hard to build. Not to mention, she barely understood what wanting to present as feminine meant.

I thought, ’I’m a cross-dresser,’ or, ’I’m a tranny,’ or — I didn’t fucking know,” she remembers. “’Am I gay?’ I don’t fucking know. But I knew there was something different, something in my head, and I knew that I wasn’t being fucking honest with myself.”

Grace’s rock-’n’-roll lifestyle helped distract her but only for so long. When she could no longer stave off the impulse, Grace allowed herself to toy with her gender presentation in secret after hours at her band’s private rehearsal space in Gainesville, Florida.
The whole experience was tinged with “a little bit of danger,” she recalls: At any given point, one of her band members could have walked in and seen her “in full femme,” outing her before she even had the chance to claim an identity of her own. She’d sometimes go for long drives alone as a way to test her bravery. It was like “living a double life,” but in those moments of solitude, Grace began to find herself.

Laura Jane Grace (born Thomas James Gabel; November 8, 1980) is an American musician best known as the founder, lead singer, songwriter, and guitarist of the punk rock band Against Me!. In addition to Against Me!, Grace fronts the band Laura Jane Grace & The Devouring Mothers, a solo project she started in 2016. Grace is notable for being one of the first highly visible punk rock musicians to come out as transgender, after she publicly came out in May 2012 (Wikipedia)