Transfeminine - A Person Who Strongly Identifies With Femininity.

What Does  It Mean to Be Transfeminine?

So, what’re the basics?

Transfeminine people are people who were assigned male at birth (AMAB) but identify more with a feminine identity.

Being assigned male at birth means that, when you were born, someone declared you a male based on your genitals. It’s a more respectful alternative to saying that you were “born a man” or “biologically male.”

Transfeminine is often used to refer to:

Why might someone opt to use this term over others?
“Transfeminine” is a broad term that applies to any AMAB person who identifies with femininity.
The term is helpful because it’s an umbrella term that describes a few different groups of people, including transgender women, feminine nonbinary people, and more. 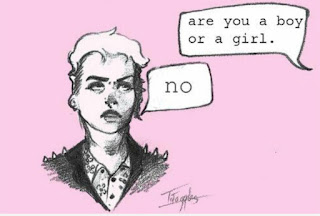 The label 'trans-feminine' can be considered either a gender identity, a gender expression, or both.

Something about dressing feminine and being referred to as a feminine person sits right with me. I like being called “she”, "lady", "ma'am", "her".  I like dressing with a feminine differential, or dressing in a dress, putting on make-up, or just being my self in jeans and sandals.