Magic Has No Gender 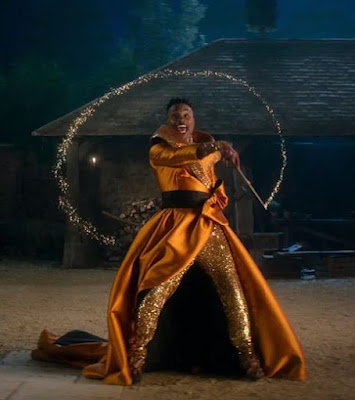 Ayomikun Adekaiyero  from the "INSDER"

When Amazon Prime Video's remake of the classic "Cinderella" story — centered on a girl who falls in love and marries a prince — was first envisioned, the Fairy Godmother character wasn't genderless.

It wasn't until Billy Porter nabbed the part that the iconic role changed due to conversations with writer-director, Kay Cannon.

The Emmy Award-winning actor joins the likes of Camila Cabello, Idina Menzel, and James Corden in a modern musical retelling of the "Cinderella" fairytale. In this version, Porter plays a genderless version of the Fairy Godmother called Fabulous Godmother or Fab G for short.

"It evolved and the thing that came out of the evolution was 'magic has no gender,' so make it genderless, gender-free, gender-fluid whatever you want to say. There is no gender," Porter, who made history as the first openly gay Black man to win a lead actor drama Emmy, explained.

Cannon told Insider that Fab G was the only character that she wrote for this remake with an actor in mind.

"The actors all came later except for Billy Porter's part. I typically write with people in mind all the time, that's kind of my thing," she admitted.

My Note: The story is different and the new adaptation of the Disney's famous cartoon and age old fairy tail is wonderful. There is diversity, music, romance, and at the end a modern twist. With its release, I am sure that Walt Disney did a "turnover" in his cri-chamber.  For me, It was so much fun to watch. Especially the over-the-top Porter.

I must share my absolute favorite quote. After the Fairy-god (something) has turned a dress sketch that Cinderella herself designed in the ball gown, it is time for Cinderella to be presented with the glass slipper; a 4" beaded pump. Immediately she has difficulty walking in them. She asked her magical benefactor, "Isn't there a way to make them more comfortable?"  The answer:

Even magic has its limits.

To all of us that have endured an evening in high heels (at the ball), we can relate to Cinderella's fate. She does handle it well and there is a storybook ending; although not the one you expected.