Wear The Darrn Dress - An Essay 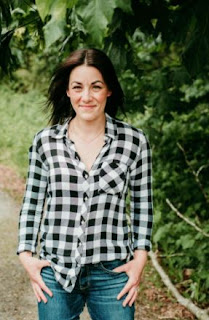 I stared at the dress for a long while.

It was just that pretty. Strapless with a gathered bodice, falling straight down to the floor. Navy blue with a shock of white, citron and hot pink flowers scattered about. Pockets. I reached out to touch the material, and the slinky rayon draped over my fingers like melted candle wax. I was in love. I was emotionally involved with a piece of clothing.

I eagerly pulled it on in front of the full length mirror, assuming I’d emerge as some sort of Aphrodite. I was a little deflated when I saw it was me standing there. The dress was still stunning. I tried to focus on that. But then I snuck a glimpse of my exposed arms, which looked woefully devoid of any definition. My hair—thrown up in a messy bun—suddenly looked dowdy, and a bit ratty. And my stomach, oh Lord, my stomach. It looked like there was still a baby in there. Not a large baby, I suppose. But a baby, nonetheless. My second round of pregnancy had left me with a belly that refused to deflate in Heidi Klum-like fashion.

Even with all the feelings, I couldn’t not buy that darn dress. Because we were in a relationship now.

So I took it home and ever-so-carefully hung it up in my closet.

And there it stayed.

I kept waiting for the right occasion, the right hair day, the right my-face-isn’t-breaking-out day. But the day never came. And I realized something:

I felt unworthy of the dress. [been there]

It was just too beautiful. Someone else deserved to wear that dress. Someone who was about ten pounds lighter than me, who had clear skin and bouncy hair and super sparkly teeth. Someone who had abs. Even one ab would suffice.

Someday, maybe, I would be enough to wear the dress. But not today.

This went on for months. In the heat of summer, mind you. When a strapless maxi dress would actually have been quite useful.

I woke up one Saturday morning, groggy and bleary eyed. I had a meeting that morning. It was not a meeting I typically dressed up for. But the sun was unabashedly gleaming through the clouds, and it made me feel buoyant and a little brave. Also, I had no clean clothes.

I shimmied the dress on, adding a chunky green necklace to make me feel less bare. I took a few extra minutes to do my hair. When I surveyed my handiwork, I had to admit I looked ok. I actually felt pretty good...

It was the way it made me feel inside, which couldn’t help but radiate all over my outside. It felt like my true self had shown up at that meeting. Fully and completely... No one is going to think that you’re trying too hard. Or that you don’t deserve to wear something so gorgeous.

They’re just going to see you. Being fully and completely yourself.