Transgender Troops On Protecting Their Right To Serve

Thank you to all of our brave troops - Especially our transgender brothers and sisters... 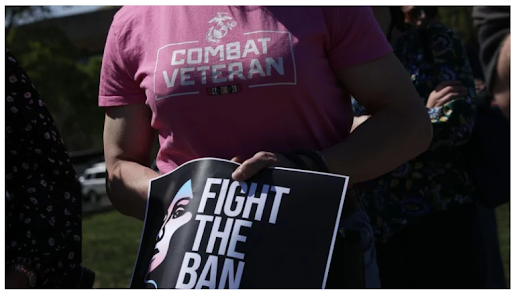 Podcast link November 29, 2021
On January 25, President Biden reversed the Trump administration's ban on transgender people serving in the military.
But the door remains open for future administrations to reinstate it.
So what would it take to protect the ability for trans troops to serve openly?
From Lt. Col. Bree Fram and Máel Embser-Herbert in their new essay collection, With Honor and Integrity: Transgender Troops in Their Own Words:

Unlike some of the debates about the gender identity of historical figures, today's controversy does not revolve around the authenticity of a gender presentation that differs from that assigned at birth. Rather, debates about the ability of transgender people to serve in the military seem to center on arguments about whether they can do so without their presence negatively impacting the military. [...] If we know that, in the 19th century, at least some of those assigned female at birth were — even when that status was revealed — recognized as having made valuable and honorable contributions to the nation through their service, why is this even an issue in the 21st century?

Listen to the complete podcast