A (very) Brief History of the Boat Neck

From the personal blog of Lori Smith aka - Rarely Wears Lipstick

Definition Bateau Neck: A wide neckline that follows the line of the collarbone and is high in front and back. (Merriam-Webster) 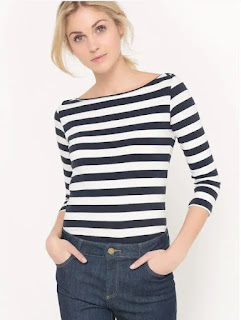 My love affair with the neckline known as ‘boat neck’ or ‘bateau neckline’ is a long one but, following the wedding of the Duke and Duchess of Sussex on Saturday, I imagine it’s going to be a lot easier to find that style in high street stores than it has been in recent years!

Inspired by Ms Markle’s stunning wedding gown – designed by Clare Waight Keller for Givenchy – I have looked into the history of this dramatic yet modest neckline. The name hints at a naval origin, so I headed straight to Amber Butchart’s book Nautical Chic to see what I could find. She says that:

The association between stripes and the sea was strengthened with the adoption of the striped undershirt into the French naval uniform in 1858 […] The striped undershirt, featuring a wide ‘boat’ neckline for ease of removal, was later incorporated into the Tsarist Russian Navy as the telnyashka, where it spread to other branches of the military during the Soviet era.”

When describing how the Breton sweater influenced fashion, Butchart says “If the 1920s were the decade when the striped top crossed from workwear to stylish casual dress, the 1930s saw it cemented as a fashion classic.”

Many attribute the arrival of the boat neck as a fashion staple to Coco Chanel and, in their book on the iconic French designer, Isabella Alston and Kathryn Dixon state that before the start of the Second World War in 1939, “the vacationers in Biarritz, just as in Deauville, snatched up Chanel’s jersey jackets, skirts and striped boat-neck shirts, reminiscent of those sailors wore.”

According to Butchart, due to an association with counter culture – as artists like Picasso and Pollock were photographed wearing it – the striped boat neck top became a ‘beatnik’ fashion in the late 50s and 1960s. The neckline then began finding its way into mainstream women’s fashions without the stripes.