Yesterday's post was about getting out during this holiday season.  Here is the event I attended last Sunday evening.

Cocktails for Compass is an annual signature fundraiser that brings together our community’s most distinguished residents for an evening of celebration and philanthropy. The night featured cocktails, hors d’oeuvres, music, dancing and an inspiring retrospective of the work of one of Compass’s most fervent supporter, the late fashion designer Alfred Fiandaca. 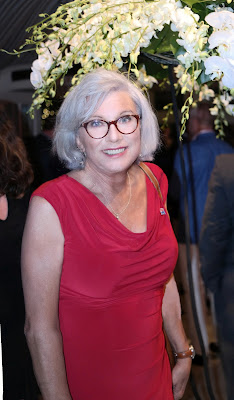 I have been involved with Compass for about 28 years having started the Palm Beach's first transgender support group; "The Gender Society of Palm Beach". I facilitated it for about six years until it grew and needed a professional leader. I still visit occasionally and take much pride in how it has grown, especially in its support of young transgender teens.

Sunday's event was held at a posh Palm Beach private club with well over 200 in attendance. It was so nicely done. The main event was models, many that are Compass volunteers, wearing vintage Alfred Fiandaca creations; beautiful gowns.

According to WWD, "The designer, a third-generation member of his family to be involved in design, was known for his coolly classic, understated looks, which were cut to flatter rather than demand attention, and thus appealed to a variety of political wives, among them Nancy Reagan, Lady Bird Johnson, Muriel Humphrey, Kitty Dukakis and Joan Kennedy. He designed for Audrey Hepburn and Julie Andrews, too."

Fiandaca, being a Palm Beach resident, was a major supporter of Compass. It was fitting that Compass honed him this evening.