Ezra Miller Is the Gender-Bending... Hollywood Star of the Future

My Note First: Rewind 50 years, (OK 55) and ask yourself how would you identify - transgender, non-binary, gender queer, bi-gender, gender-fluid... All these terms that did not exist then. Yes, any one, could have been used to describe us. Given the opportunity that youths have now, how would you self identify?
Below is a success story of a very talented actor and how they/them self identify. What a beautiful gender spectrum that exist now.

From Wikipedia: Ezra Matthew Miller (born September 30, 1992) is an American actor. Miller's feature film debut was in Afterschool (2008). They starred as Kevin in the drama We Need to Talk About Kevin (2011) and co-starred in the film adaptation of The Perks of Being a Wallflower (2012). In 2015, Miller co-starred in the drama The Stanford Prison Experiment and the comedy Trainwreck. They played Credence Barebone in the Fantastic Beasts films Fantastic Beasts and Where to Find Them (2016) and Fantastic Beasts: The Crimes of Grindelwald (2018).

Miller uses they/them pronouns, which GQ wrote in 2020 was "a pointed refusal to be gendered." Miller previously used all pronouns interchangeably, but in December 2021 said that they no longer did, preferring they/them, it, or ze..

Having expressed an interest in "kissing boys" at a young age, they stated, "The way I would choose to identify myself wouldn't be gay. I've been attracted mostly to 'shes' but I've been with many people and I'm open to love whatever it can be."[19] Miller also commented on having "a lot of really wonderful friends who are of very different sexes and genders. I am very much in love with no one in particular." 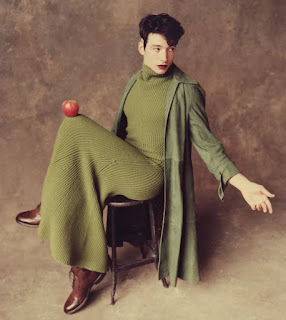 Miller also portrays Barry Allen's Flash in the DC Extended Universe, beginning with a role in Batman v Superman: Dawn of Justice (2016), a cameo in Suicide Squad (2016) and later as one of the leads in Justice League (2017), and its director's cut Zack Snyder's Justice League (2021), and will reprise the role in the standalone film The Flash (2022). They also reprised the role of Barry Allen on television in The CW's Crisis on Infinite Earths crossover in 2020. In 2020, they also had a recurring role on the miniseries The Stand.
Miller told GQ in 2018 that his gender identity is fluid and he's "comfortable with all the pronouns."

Miller has been thinking a lot lately about his own masculinity and gender expression. He was nervous about posing for GQ Style, because he wasn't sure if he could fit the mold. But the experience turned out to be just what he wanted. "I was pleasantly surprised and overjoyed by how much room there was for my very strange and fluid expressions," he says. Miller publicly came out as queer in 2012, and today he tells me his gender identity is fluid. "I'm comfortable with all the pronouns," he says. "I let he/his/him ride, and that's fine."
Posted by rhonda's escape at 5:00 AM