Why this 11-year-old transgender activist is fighting for the right to medical care in Texas: "I have to speak up"

Brittany Jones-Cooper·Reporter
In the U.S. there are currently 238 proposed anti-LGBTQ bills in state legislatures. More than half target transgender people and, in states like Texas, they specifically target gender-affirming care for trans youth. 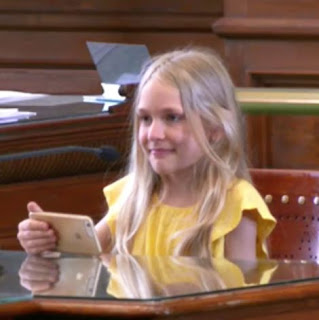 But fighting for equality has become a mission for Kai Shappley, an 11-year-old transgender activist who says her identity is not up for debate.
“I was always a girl,” the Texas-native tells Yahoo Life. “I was about 3 when I realized my mom and some of the people around me didn't know who I was. It took a little bit, obviously, but at about 4 and a half, my family and I came out publicly.”
While her family has always loved and supported Kai, others in their Texas community did not. In 2016, her mother Kimberly fought back when an elementary school in Pearland, Texas refused to let Kai use the girl's restroom. That same year, when Kai was 5 years-old, Kimberly testified before Texas lawmakers to oppose bills that would limit the rights of her child and other trans youth. With her daughter sitting on her lap, Kimberly declared that she was a "Republican, a Christian and the mother of a transgender child."
"I was really proud of her, honestly. Just seeing how she went up there and she started talking, I was like, 'That is my mom. That is a very powerful woman,'" says Shappley. "If it weren't for her, I probably wouldn't have found my own voice. That moment happened and I was like, you know what? I have to speak up. I have to start talking too."
In 2018, Kimberly and her children moved out of Pearland to a different city, where the school is more inclusive.
Since that moment, Shappley has become an outspoken activist for trans rights. Along with her mother, she has traveled around the country sharing her story at LGBTQ rallies, and has pushed for lawmakers to reject bills that target the transgender community.
Read More
Posted by rhonda's escape at 5:00 AM