Is This What You Want - Christian Fascism? 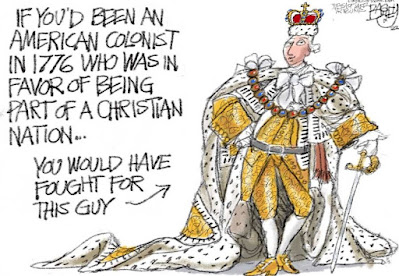 Is living in a "Christian Fascist" governmental state, something you desire?  Understanding where we are headed is fundamental.
Definition of fascism:

A political philosophy, movement, or regime (such as that of the Fascisti) that exalts nation and often race above the individual and that stands for a centralized autocratic government headed by a dictatorial leader, severe economic and social regimentation, and forcible suppression of opposition. Wikipedia
Christian Fascism has its start when Pat Robertson and other radio and television evangelists began speaking about a new political religion that would direct its efforts toward taking control of all institutions, including mainstream denominations and the government. Its stated goal was to use the United States to create a global Christian empire. (https://www.popmatters.com/christian-fascism-american-democracy-hedges)
Here is one of the most interesting aspects of this new Christian Fascism according to the Pew Research Center:

Nearly three-quarters of U.S. adults (73%) say religion should be kept separate from government policies, according to a survey conducted in spring 2022. Just 25% say government policies should support religious values and beliefs.

Despite the will of the majority, consider the Supreme Court is relentlessly funding and empowering Christian Fascism. This is the Trump / McConnell court. It not only overturned Roe v. Wade, ending a constitutional right to an abortion it did much more; the list continues:
Outlawing contraception, same-sex marriage, transgender right/protections, and same-sex consensual relations are probably next. Only 25 percent of those polled say they have confidence in this Supreme Court decisions.
CNN has an opinion post entitled, "A terrifying glimpse of what could await America after the 2024 election".   [This] should serve as a huge wake up call to voters that they would be electing a man who will let nothing -- not the truth or the safety of Americans -- stand in the way of his omnipotent aspirations.  Let me add that Ron DeSantis is equally dangerous.
So why is Christian fascism dangerous. Having strong religious beliefs is a fundamental right all Americans cherish. But, the rise of a movement that believes the separation of church and state is a myth and advocates for a government shaped by conservative Christian values as a political force is a threat to a diverse, democratic, multicultural America. Having Christian nationalists imposing their beliefs on the rest of us is counter to everything America has championed throughout its history.
Speak out!  Vote!
Posted by rhonda's escape at 5:00 AM