I Love A Success Story - Abby Hwong, AKA NoSo

NoSo's debut album is a care package for someone in need: Their younger self

By Elle Mannion
The Korean American singer-songwriter toys with the nuances of identity and escapism on their guitar-led debut album.
"Music has always been a tool for me to express feelings I feared would be unacceptable, in a form that's more poetic and palatable for people," says Abby Hwong, the Los Angeles-based artist who performs as NoSo. In their dreamy indie rock songs, Hwong wrestles with what it means to confront those fears and emerges with confidence, becoming accepting of — even proud to share — those feelings. That newfound fortitude is at the heart of their debut album, aptly titled Stay Proud Of Me, which they describe as a labor of love written to their younger self.
All Things Considered Interview:

I think some of the earliest memories I have all revolve around gender. I think I was around 4 years old when I started becoming kind of cognizant of it. And I would be in preschool, and I would see these boys around me, and I would feel this strange envy. And I couldn't articulate why I felt that way, but I had a feeling it was unacceptable to say out loud. And I would always think, like, oh, this can't be it, right?

Music has been integral to Hwong's life since childhood: Their album's cover art was inspired by the '80s Korean records their parents played for them as a baby; growing up, they would see legends like B.B. King, Bonnie Raitt and Aretha Franklin at the Chicago music festival where their mom worked. Hwong began playing guitar at age 12, but didn't start writing music seriously until moving from the Midwest to Los Angeles at age 16. "That's when I was able to look inward and feel like I had a valid reason to write emotional songs." Hwong explains. "That allowed me to see, going forward, that everything I had repressed, I could write about." They eventually attended the University of Southern California to study popular music. 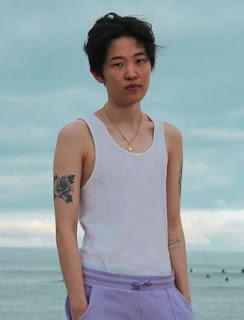 NPR Music first discovered NoSo when they entered the Tiny Desk Contest in 2019 with a song that showcased their impressive guitar skills, including an earworm riff that still sounds refreshing years later. You can hear Hwong's virtuosic, memorable guitar playing throughout Stay Proud Of Me, which is also elevated by a fuller production of cinematic synths and lush pop sounds; they're especially skilled at packaging heavy subject matter as a catchy hook or chorus without cheapening its sentiment. Hwong is nonbinary, and their songwriting has been a place where they process their evolving gender identity. They wrote the album's opening track while recovering from gender-affirming top surgery: "So lovely to meet you, again / so lovely to be born again," they sing gently as the instrumentation swells, setting a compassionate tone for the album. On songs like "Suburbia" and "David," they reflect on growing up in a nearly all-white Chicago suburb; on "I'm Embarrassed I Still Think Of You" and "Feeling Like a Woman Lately," they reflect on their identity as a queer and trans person. Across the album, they give themselves freedom to explore varying instrumentation, experiment with song structures and play out their daydreams.
Stay Proud of Me is released on 8 July via Partisan8
Posted by rhonda's escape at 5:00 AM