As a trans woman, I thought I had to ‘prove’ myself by dating men and looking feminine – here's why I changed my mind

When I was old enough to speak, I made my thoughts very clear to everyone around me that I wanted to be a girl. Whether that was putting towels on my head and pretending I was Ariel from The Little Mermaid, or being obsessed with the Spice Girls, Barbies, and anything typically “girly.” I always knew my soul didn’t match the shell I was born into.

One of my very earliest memories was feeling left out and outcast at school when it came to relationships and games such as ‘The Love Tunnel’ where everyone would make an arch with their hands in a row, the music would play and you would run underneath. When the music stopped, your arms would drop and you would have to kiss whoever landed in your arch. My stomach would fill with dread every time we played this.

I felt so confused in my gender identity that I hadn’t even thought about sexuality, or what I might be attracted to. I didn’t want to properly be with someone until I had found myself as a woman. We would have school discos where the boys would ask out the girls – I always felt like I was robbed of these moments as a transgender teenager. I always saw myself as a prom queen in disguise.

As I started to go through school, the questions and rumours started to circulate. I would constantly be asked if I was gay or into boys. I never wanted to call myself ‘gay’ as I didn’t feel comfortable using that term before I transitioned. I would always say that I was bisexual as that’s what term I felt comfortable using because it was a less gendered word, even though I was never attracted to girls at that stage of my life.

When I started hormone treatment at 16, I had never felt attracted to a woman. I admired so many strong, powerful, and sexually empowered women who I actually wanted to be.

I know many trans women who have found themselves attracted to women when they start taking hormones.” 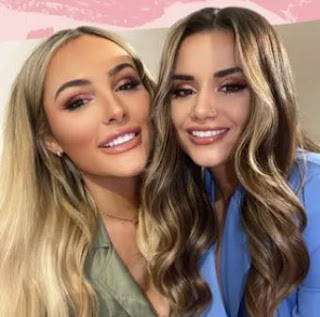 A few years into my transition, my natural thoughts of how I saw myself in a relationship started to shift. I found myself being open to dating women as I grew more comfortable in my own skin. I know many trans women who have found themselves attracted to women when they start taking hormones. I’m not sure why or if there is any scientific explanation but I think it’s something to do with being so comfortable in your body that you want to share that with a person, not a gender.

Today, I live as an out and proud trans woman who is in a long-term relationship with a cisgender woman. Being in a same-sex relationship, I’ve been able to fully embrace and learn a lot about my own womanhood, femininity, and masculinity. I’m no longer leaning away from more ‘masculine’ traits and also don’t feel the need to force femininity. I’ve just cut my hair into a bob; 2019 Cambell would be crying into her Rapunzel length extensions if she could see!

I spent so long seeking validation for my womanhood, but I didn’t realise the woman was always inside me, ever since the day I was born.