"It is with profound sadness that on behalf of her family I announce the passing of Irene Cara," read the statement on Cara's Twitter page posted by her publicist, Judith A. Moose. "The Academy Award winning actress, singer, songwriter and producer passed away in her Florida home."

The cause of death is unknown, Moose said, and funeral services are pending.

"She was a beautifully gifted soul whose legacy will live forever through her music and films," Moose said.

"This is the absolute worst part of being a publicist," Moose said.  "I can't believe I've had to write this, let alone release the news. Please share your thoughts and memories of Irene. I'll be reading each and every one of them and know she'll be smiling from Heaven. She adored her fans." 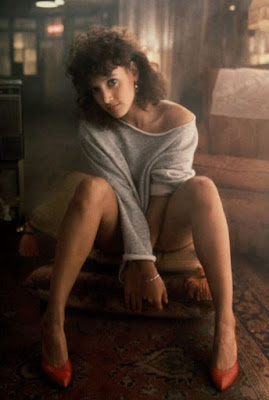 Cara was nominated for a best actress Golden Globe for her performance in the 1980 musical "Fame" and  later won for singing and co-writing the theme song to "Flashdance" in 1984. Cara is also a Grammy winner who performed in numerous live theater performances during her career.

My Note: What red blooded male or female did not love the cold shoulder shoulder sweet shirt and red heels look from Flashdance.  My first introduction to "toe-cleavage". I know I bought a pair or red heels after watching the movie; which I am sure I saw more than once.

What a story. Jennifer Beals played an amazing part and the dancing was amazing. The iconic song written by Irene Cara is a classic. A sad memory this morning.

Remember by wearing your red heels and listening to "What A Feelin".