Can we stop it before it is too late?

BY Rhonda Williams
I am fearful of what will happen after the mid-term elections. I do not see the election results going well for the LGBTQ community and The American Democracy as we know it. The vocal and mean ultra-right movement first pointed  its sights on making the transgender community invisible. More threats now abound. However, there is a much larger issue looming.
The ReAwaken America Tour is a  conservative Christian revival with some of the most prolific spreaders of conspiracy theories barnstorming across the country. In this circus there is a stacked cast of pro-Trump speakers, preachers, and self-proclaimed prophets. Michael Flynn, who served briefly as the national security adviser during the Trump administration is one of its most prominent preachers. Speaking before this conservative Christian audience, he stated the United States of America should have only one religion. “If we are going to have one nation under God, which we must, we have to have one religion,” he said.
Marjorie Taylor Greene (another ReAwaken America Tour darling) embraces  Christian nationalism that follows closely the troubling remarks from Colorado Republican Rep. Lauren Boebert: “The church is supposed to direct the government, the government is not supposed to direct the church.” 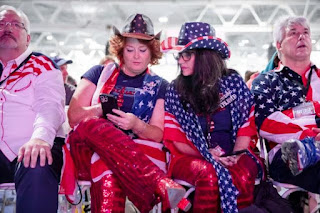 Attendees are a true lunatic fringe element made up of uneducated conspiracy zealots. These facts alone do not make then less scary or dangerous. From the same stage, earlier, Julie Green, an ally of Pennsylvania Republican gubernatorial candidate Doug Mastriano, told the audience God had spoken to her and sent a prophecy. “God said he can take this country back in unconventional ways. He doesn’t need an election to do it.”

I do not fear these individuals. These lunatics are the useful idiots of skilled politicians to divide America. What I do fear is the political leaders that are going along with the message. The message is providing cover for autocratic leaning, "power at any price" politicians. DeSantis is a perfect example.

Autocratic leaders are distracting the voting public's attention with “Don’t Say Gay”, “Drag-queen Story Hour” and “Transgender individuals want to turn all boys into girls”; all lies. Their true plot is a one-party takeover of our democracy; elections be dammed. Do they care about these issues? No - However, the majority of voters are not seeing what is happening in the background.  Fox news leads the diversion.

One only needs to study what happened in Germany post 1933. This is history repeating. And, we all know what occurred there. Let us hope we do not share that common heritage.

We’re on the edge of a brutal authoritarian system, and it could be [less than] a week away."

Be forewarned. We are witnessing the end of The American Democracy as we know it today. Can it be saved?

*Roger Stone's formal charges: The seven counts against Stone include one count of obstruction of an official proceeding, five counts of false statements -- including lying to Congress -- and one count of witness tampering in special counsel Robert Mueller’s probe into possible collusion between Russia and the Trump campaign during the 2016 presidential election. He was convicted of all counts on Nov. 15 2019 and sentenced to over 3 years in prison. Donald Trump Pardoned Roger Stone December 23, 2020.
Posted by rhonda's escape at 12:00 PM