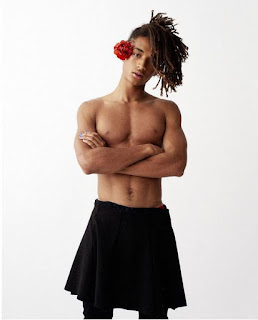 Source TheStir - (Tanvier Peart) All a parent wants is for his or her children to thrive and be the best version of themselves. And sometimes, that means allowing them to be who they are. The fact that Will Smith supports his son Jaden's wearing "women's clothing" shouldn't come as a shock, as the 48-year-old dad is a proud papa who wants his children to relish in every aspect of who they are.

Smith caught up with BET to discuss his movie Collateral Beauty, and opened up about allowing his kids (Will has two children, Jaden, 18, and Willow, 16, with wife Jada and son Trey, 24, from a previous marriage) to explore who they are -- specifically Jaden, who has worn dresses and feminine clothing on numerous occasions -- regardless of the gender labels society tries to enforce.

"I feel that the greatest gift that I can give my children is the freedom to be who they are," Will tells BET.com. He continues:


I feel like a lot of times, when I was growing up, I would see parents force a child to be who you want them to be. As a parent, if it's an oak tree, I want it to grow as an oak tree. I'm not going to try and force it to be an apple tree.

Jada and I are very serious about finding what they [Smith's children] are and encouraging them to be what they are, because you can never be happy being what you're not. We encourage our kids to experiment and seek who they are more than who we want them to be.


Regardless of how you feel -- or where you stand -- on boys' "dressing" like girls and vice versa, it's great to hear Will is being a supportive parent to his children. No one knows if Jaden is going through a phase, or if defying societal and gender norms is his thing.

... And honestly, it's really none of our business.