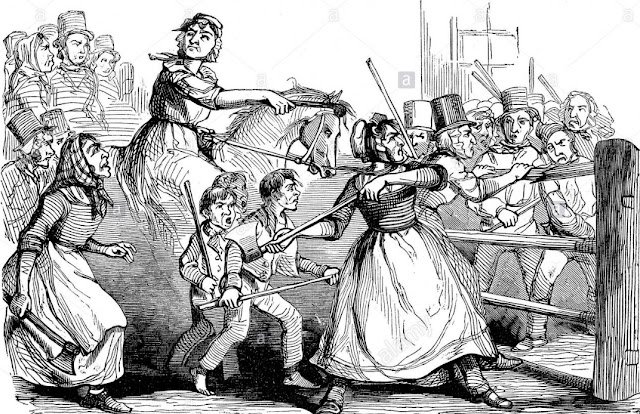 Rebecca Riots in Wales. Men and boys, many dressed as women, attacking a turnpike gate in protest at charges at tollgates on public roads. Another of their main targets was union workhouses. From 'The Illustrated London News' (London, 11 February 1843).

59 Thus they sent away their sister Rebekah and her nurse with Abraham's servant and his men. 60 They blessed Rebekah and said to her, "May you, our sister, Become thousands of ten thousands, And may your descendants possess The gate of those who hate them." 61 Then Rebekah arose with her maids, and they mounted the camels and followed the man. So the servant took Rebekah and departed.…

What on earth could these verses have to do with cross dressing. An interesting piece of history. Source Wikipedia (Paraphrased)

The Rebecca Riots took place between 1839 and 1843 in South and Mid Wales. They were a series of protests undertaken by local farmers and agricultural workers in response to perceived unfair taxation. The rioters, often men dressed as women, took their actions against toll-gates, as they were tangible representations of high taxes and tolls. The riots ceased prior to 1844 due to several factors, including increased troop levels, a desire by the protesters to avoid violence and the appearance of criminal groups using the guise of Rebecca for their own purposes. In 1844 a Parliamentary act to consolidate and amend the laws relating to turnpike trusts in Wales was passed. Answering the protesters demands.

Although these early 'uprisings' were few and uncommon, they were the first appearance of mobs dressed in disguises. But why Rebecca? These gangs became known as Merched Beca (Welsh for "Rebecca's Daughters") or merely the Rebeccas. The origin of their name is said to be a verse in the Bible, Genesis 24:60.  This verses would be s shouted many times from the religious men of the area.

Prior to destroying the toll gates, "Rebecca" (the protest leader) would call to his followers who were also dressed as women and perform a scene which involved this chant.


Rebecca: "Wait! It feels like a big gate put across the road to stop your old mother.
"Rioters: "We will break it down, mother. Nothing stands in your way."

This would then in turn lead to the destruction of the toll gates.


Just a little piece of history where men dressed as women.
Posted by rhonda's escape at 5:00 AM