Slept deep and long. The sun was my alarm clock. It was glorious after three days of low grey clouds and almost incessant rain. A warn long shower and perfumed body wash, and gentle scrub set the tone and mood for what became a very fulfilling series of adventures and excursions which extended more than eighteen hours. My waking schedule was void of any business and personal obligations so the day could be a free-flowing Marie day.

When checking the E-Mail noted a flood of E-Mail advertisements. Included was one from Macey, Dillard’s and TJ Max, all three touting fabulous sales for Monday’s Day. Another from a nearby country hang-out heralded - the traditional drink of the Derby (and a favorite of mine) as well as a “Fancy Lady’s Hat” contest (another Derby Tradition) with a hundred dollor prize to the winner. This latter enticement got my juices going and Marie decided to attend the Derby Party and enter the contest since a perfect large white hat was residing on the closet shelf. The thrill of competing was another motivator and the possibility of if not win, at least show or place.

Had not forgotten the Mother Day' sales. Planned on “visiting” all three sometime during the day. Just as I was about to close down the PC another message came flashing in from Macy’s. This one focused on Lingerie and highlighted several “Shorty Nighties” and full slips. This was very opportune as I had been unsuccessfully scourging the neighbor stores looking for delicious colorful shorties with matching panties and several full slips in my preferred style and colors and quickly ordered two of each. The Marie train was rolling. Hopefully will not be disappointed when they arrive.

With the basic agenda set, and these little delays completed it was time to put together an appropriate outfit and prepare a winning presentation. A long filmy black and white skirt, however, given its relatively sheer material added a black half-slip underneath. This was an extra degree of female silkiness and sensuality to my psychic. Matching lace bra and panty were next, no need for hose, well-tanned legs would do, along with black flats adorned with flecks of silver-crystal. Added a white silk top with a scoop cowl neckline and three-quarter length sleeves. Jewelry was chosen to compliment the black and white motif. A double tiered sparkling necklace was the centerpiece along with matching dangling earrings, bracelet, engagement ring and slender watch.

Had plenty of time before the Great Race and the Hat competition so decided to cruise the sales venues first. Each was a disastrous success. That is each yielded a prize “just had to have”. First was a blue and white summer dress suitable for a cocktail party or lunch with the girls at a lakeside café. Found a matching pair of light blue and white heavenly heels a perfect combination. This was a bonus. Had not been on the “Have to Have list” but could not resist – another weakness of mine. The next was a black negligee that would be an outstanding and stunning complement to the Macy Shorty’s.

With this triple find tucked into the back seat drove to the bank to pick up cash before taking the road out to the country and the Mint Juleps. The bonus in both of the department stores was being just one of the girls cruising and appraising the multiple possibilities. Felt perfectly comfortable gliding through the flow of women amid the magnificent spectrum spring colors, fabrics and styles. Did not attach any attention. All the other shoppers, were focused on their own browsing, color selection, piece matching and texture caressing. Juist thinking back and recalling the overall feeling of being just one of the girls was wonderful and further exuded by my anticipation of circulating in the Race Crowd with a Julep in one hand and my Contest Hat nestled jauntily on my blonde crown.

Upon arriving at the Club and after parking under the Magnolias walked to the main Pavilion, purchased my ticket and found my way to the Julep Bar – Selected one Strawberry flavored and one Pineapple along with a Spinach and Three-Cheese Quiche – a perfect ladylike choice. When the waiter delivered the order to Table 37, which was set for a party of two, I tipped the young gal, thank her and stated I was expecting a girl-friend but she was running late – As usual - but hoped she would arrive before HAT Contest as she had a darling number. Learned the contest involved a short walk on the stage where the band was set up. The order was determined by your table number and would not be starting for 40 minutes more. More than enough time to daintily savor the Quiche and begin the second Julep. Had to turn away one young man who was cruising the grounds on the hunt. Fortunately, this was a just few minutes before the HAT Parade was to begin.

The band took a ten-minute break and then came back and played a medley of old south songs to set the mood. Then a young man in a Red Jacket ascended the stage, moved to center stage bowed to the band and then the audience and the MC and positioned himself on the far side and raised his long brass horn and blew the sound familiar to all Derby Fans. Then the MC announced the order of presentation and explained only one contestant would be on stage at time entering from his left and exiting to his right. Each contestant would walk to center stage carrying THE HAT in the left hand at her side and upon reaching that point the band would suspend playing and the drummer would initiate a short drum roll whereupon the lady would gracefully show the HAT to the audience -left and right - and then gracefully position it on her head in a manner of her choice.

When it came time for table 37 my invisible girl-friend still had not arrived and I was nervous as I made my way to the stage steps and the center of the platform. Almost dropped the hat going up the steps, but I was not the only one, and recovered without any further mishaps. Made my way to the center point, and with a big smile presented the HAT-Left and Right- in a very deliberate manner. Then having placed the HAT securely on my blonde crown, remember my training from the Dancing Sisters Act of years before did a very proper courtesy to the audience and proceeded off the stage to a round of enchanting applause. The HAT came in third, but I drove home a winner in a delightful cloud of inner femininity. 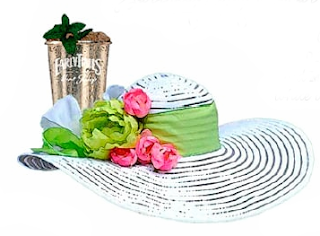 Thanks Marie.
What a great "ESCAPE" story.
Wish I had thought to check on a Derby party as well.  Next Year.