When to Wear Nude or Black Bras 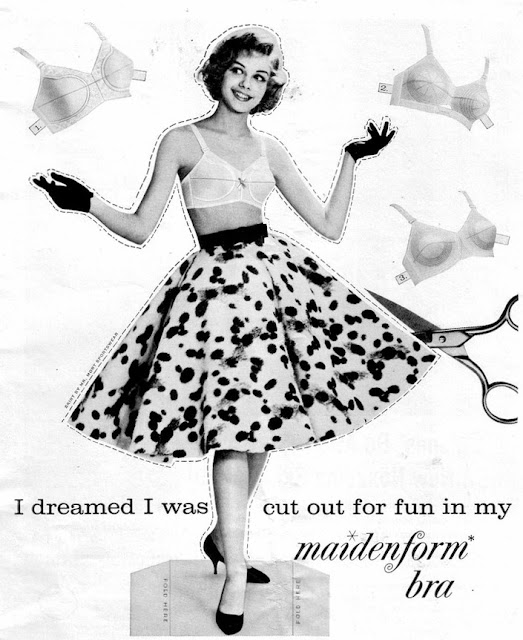 I had a bra discussion back a year ago.  This is further points on the most "feminine differential" one could imagine.  If you only get out a few times a month or just attend conventions that might work for you.  By keeping one's tops to a certain pallet of colors it might also work with the three bra suggestion. However after rereading the article I see fallacies.   First I did not like the illustration showing a white (almost sheer) blouse being worn with a black bra.  That screams for unnecessary attention, which might not work for us.  To me it says, lack of planning – I forgot to pack my white/nude bra.


Here is what Linda The Bra Lady wrote in her blog:

For years, women have been wearing white bra and panty sets. Think back to your first bra. Was it white? Most likely! White is the classic underwear color. But, take a look around my gigantic stock room and among the thousands of bras, it’s hard to find many in white. Why is that? Most companies, and my savvy customers, have caught on that nude is the new neutral. Though it may not always be necessary to wear a nude colored bra, it’s especially important when wearing white clothing. With Summer upon us, I’ve noticed a lot of women wearing the wrong color under their lighter clothing. This one’s for you!
Don’t panic! It’s still OK to wear white. It’s just important to know that nude is more neutral when wearing white. White is now considered a “fashion color”. If you love the look of white bras, if you are wearing a printed or colorful blouse, or if you like the bra peek out or show a bit, then go for it! Remember, it’s all about feeling and looking your best. Personally, I think wearing the right size is always the most important part of feeling great. Then, go for the style that makes you feel spectacular.

I really like the look of the t-shirt bra shown yesterday and it is a mush have to have smooth lines underneath a casual shirt, as in t-shirt. In doing so make sure it is low cut enough to wear with scoop neck and V-neck tops plus provides coverage that does not have a lot of hang out/over. Maybe you need a bigger size? Awesome! In putting together “The Feminine Differential” articles I never realized that there were so many rules. – Rules seems so harsh however that these actually exist is a “Feminine Differential”. Therefore, here are a few more bra suggestions:

When to Wear Nude or Black Bras


A good outfit starts with a good foundation, which means that picking out your undergarments can be just as important as the actual outfits you wear. Wearing bras can be tricky. The right bra leaves you looking well put together, while the wrong bra can completely ruin your look. There are times and places to wear black and nude bras. Make sure you know how to get the most mileage out of your bra by wearing it correctly.


Wearing a black bra under a white top is pretty much always a fashion no-no. Regardless of how thick your white top is, get it under the right light and there's a pretty good chance that your bra will show through. When wearing white tops, opt for a nude bra instead of any other color; this includes white, which also shows through due to its brightness. Anything that's going to make your bra an evident part of your ensemble is generally not a great idea.


You can almost never go wrong with a nude bra. As in the case with a white blouse, nude is the ideal choice under colors and prints when the fabric or color hue is light enough to allow your underclothes to be visible. Wafer-thin T-shirt fabrics, pastel colors and prints with a light-colored base can easily show a colored bra. Because nude is close to the shade of your skin, it will blend with pretty much anything you wear -- whether it's a little bit sheer or not

When to Wear Black


No fashion rule (suggestion) is completely straight forward. Black, of course, is an ideal choice when you're wearing a dark shirt, such as burgundy, chocolate or navy blue. If you're wearing a sheer black top, it's perfectly acceptable to wear a black bra under it without putting a camisole between the two, even if the black bra peeks through. Just be sure to pick a bra that gives full support. If you're feeling more modest, pick a blouse that's not super sheer so you still get that sexy hint of bra without going overboard.