Rain Dove is an androgynous model making waves in the fashion world with her captivating gender non-conforming look.

Having turned heads during New York’s Fashion week, Dove is slated to participate in the Queer Fashion Week taking place in Oakland, California, April 16-19 (2015). Dove is just one of many models who are changing the face of fashion today as people come to understand the many shades and hues of human identity as it intersects with the world of fashion.

Every time I put on a new garment, do a new shoot theme, or don new makeup, I am exploring another person’s vision of how they see me. This has allowed me to define and enjoy/face sides of myself I wouldn’t normally. It’s made for some really interesting stylistic discoveries such as the fact that I enjoy the temporary feel of high heels, the pressing of corsets, briefs over boxers. Most importantly the fashion world has led to the knowledge that since every image is of me, it represents me and, therefore, everything I do is perfect stylistically and nothing could be wrong because there is no wrong way to be me as long as I’m choosing to be it. Knowing that nothing was wrong with wanting to wear what I wanted because I wanted to wear it, that was the rewarding part because that’s the part I get to share with the world. Hopefully they will understand it for themselves and discover that satisfying truth in their own ways.


Rain Dove turned plenty of heads at New York's Fashion Week as she walked the runway in both menswear and womenswear, but the strikingly handsome 6-foot-2 model doesn't really care what you think she has between her legs. "The gender thing doesn't exist; it's a social construct you don't have to fit into," Dove told BuzzFeed News.

See other fashion photos that display a complete range of style, sexuality, and masculine/feminine looks. Wow! What a range.... 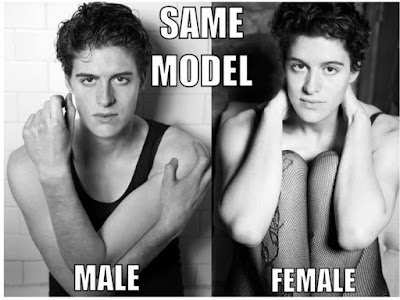 A self-titled "gender capitalist," Dove uses other people's
confusion to her advantage.
Posted by rhonda's escape at 5:00 AM