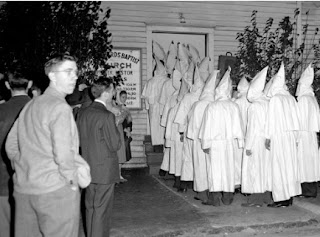 I was raised in the south and a personal witness to how religious freedom can be used to justify hatred and bigotry.  This is what Judge Leon M. Bazile said January 6, 1959.

“Almighty God created the races white, black, yellow, malay and red, and he placed them on separate continents. And but for the interference with his arrangement there would be no cause for such marriages. The fact that he separated the races shows that he did not intend for the races to mix.”

In the words of one professor at a prominent Mississippi Baptist institution, “our Southern segregation way is the Christian way . . . . [God] was the original segregationist.”  That should shock you.  Many segregationists justified racial bigotry on the very same grounds that religious conservatives now hope to justify LGBT hatred and discrimination.

The ACLU weighed in with this concise statement: Religious freedom in America means that we all have a right to our religious beliefs, but this does not give us the right to use our religion to discriminate against and impose those beliefs on others who do not share them.


There are widespread reports President Trump will sign a “license to discriminate” executive order this Thursday. This order could provide federal contractors, grantees, and potentially even federal workers a free pass to discriminate against transgender people using taxpayer dollars. This would be the worst attack on transgender people since the Trump administration withdrew lifesaving guidance that supported trans students.


Tell President Trump: Don’t Sign a License to Discriminate!  Read the call to action here.  This is personal.  This is hatred and bigotry justified as religious rights. We have been there before and it was wrong then.  It is wrong now.


Religious liberty should not be used as an excuse to discriminate.

Also read this from the Huff Post. Can Religious Freedom Be Used to Discriminate?
Posted by rhonda's escape at 5:00 AM